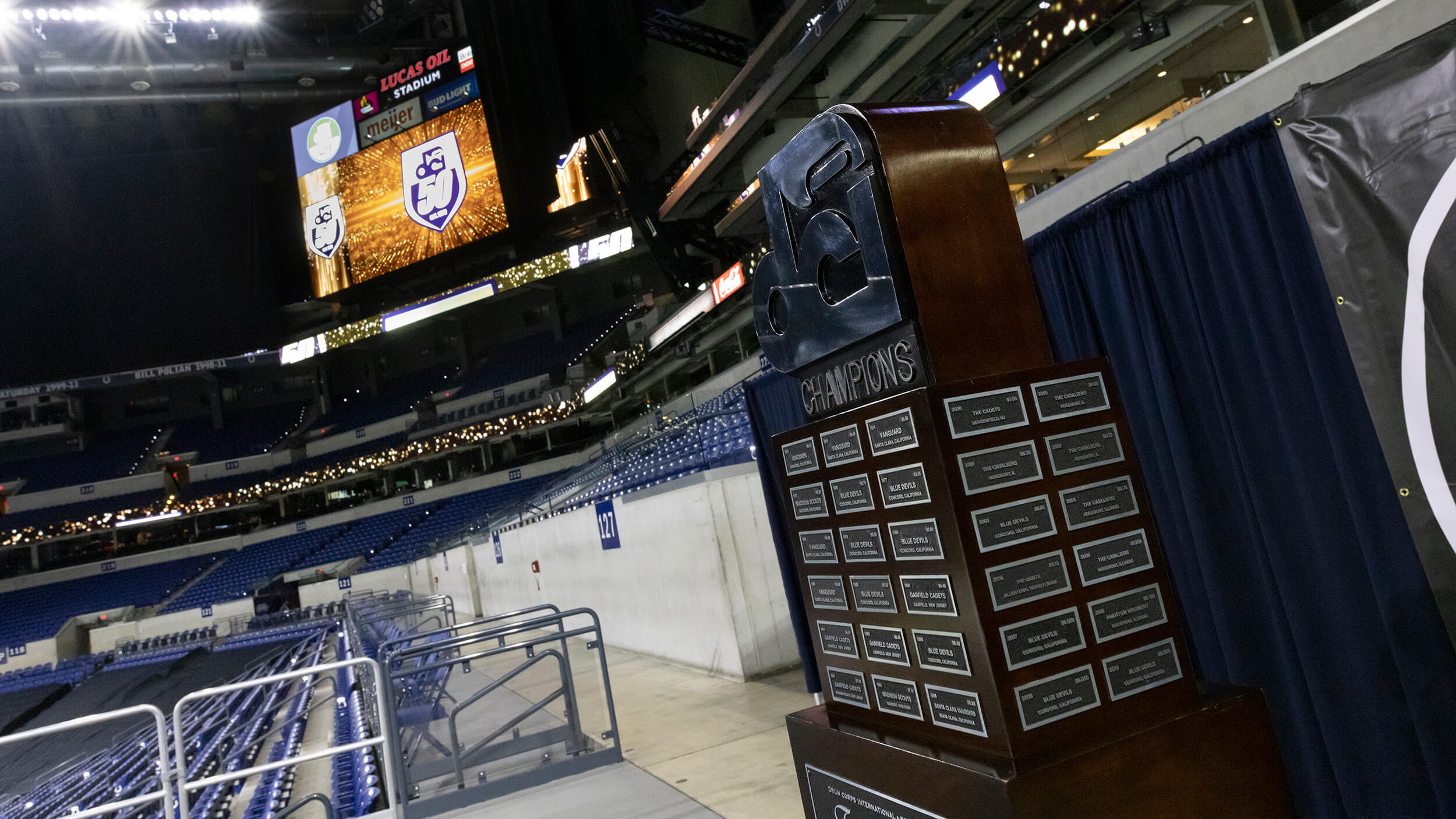 When preliminary conversations began regarding any sort of a 2021 Drum Corps International season, it might have been anyone’s guess as to whether or not a single event would become a reality. The challenges brought about by the COVID-19 pandemic had undoubtedly changed the course of history and quite certainly the impact was being deeply felt by families and individuals from every corner of the globe.

Despite the best and most noble of intentions to provide a worthwhile and safe experience for thousands of would-be performers and the tens of thousands who support them along the way, would any sort of tour or event schedule be prudent, much less possible? Would it even be worthwhile to consider a restart plan in the face of such significant challenges, not to mention the associated risks of doing so?

Would corps with limited resources have the wherewithal to create any sort of “safety bubble” as was being attempted by professional sports organizations? Would parents and students be receptive to gathering en masse in the touring drum corps setting and would school administrators – often the unsung backbone of the touring model – enthusiastically welcome these traveling ensembles back into their facilities? Would fans of drum corps feel comfortable returning to the audience to share in the communal sensory feast of the DCI experience?

The thousands of hours of research, meetings, discussions, professional consultations and unwavering commitment from countless people within and outside of the DCI universe resoundingly answered the question this week as the 2021 Drum Corps International Celebration Tour set down roots in the familiar confines of Lucas Oil Stadium in Indianapolis.

Three days of unbridled joy arrived in the Circle City this week.

Despite an unorthodox lack of competitive evaluation, the teams performing over the three-day “Celebration” perhaps personified all of the values of the drum corps orthodoxy: team over individual; resilience; commitment to task; single-mindedness in the pursuit of one’s personal best.

At its heart, after all, the drum corps art form is one founded in and tightly bound to competitive pursuits. The decision was made early-on to remove that variable from the equation was intended to provide the participating groups with increased flexibility to better prepare themselves for the season with many unknowns still facing them. From casting and rehearsing performers to choosing repertoire and designing programs with far less time to polish and perfect to the expected standard, the entire point of the 2021 season was to safely restart after a year of dormancy and serious concern over the ability to resume operations if one year of darkened stadiums stretched to a second season – while delivering the world class educational and personal development experience which is the hallmark of Marching Music’s Major League.

And prepare themselves they did.

The expectation for spellbinding performances from the world’s most elite marching music ensembles for student musicians and performers is a given. High-achieving on-field performances are the stock-in-trade of every one of DCI’s celebrated performing groups. But in the summer of 2021, the remarkable corps performances achieved in the face of incredible odds were only a part of the story.

The thunderous applause from those in attendance during each of the past three days was not merely offered in recognition of a job well done on the field in front of them, but was a very obvious sign of gratitude for persevering through whatever it took to even make it to that field in the first place. Although the competitive machine which powers the drum corps activity in a “normal” year was missed, it is undeniable that the emotion on both sides of the front sideline in Indianapolis over the past week was in some ways may be greater than It would be under the more cut-and-dried format of a conventional year. It is very difficult to walk away from the DCI Celebration without the renewed realization that the scores and competitive aspects of drum corps are a means to an end, but definitely not the end unto itself. The faces of the performers told that story over and over again, and the crowd enthusiastically ate it up.

To the delight of thousands in attendance and countless others watching from home, the three days of the 2021 DCI Celebration provided thumbnail sketches of the past, present and future of the DCI legacy, including a nod to some of the most cherished traditions of its nearly five decades of evolution. In order to get the full picture of the joyous crescendo which grew over the past 72 hours in Indianapolis, one must also look to the consistently impressive and often unexpected things which occurred between conventional full ensemble corps performance runs.

733 days after last pulling out of Indianapolis in 2019, with a resounding opening performance by Cincinnati Tradition, the drum corps activity made its triumphant return to the field at Lucas Oil Stadium on Thursday.

But 21 drum corps performances were the main entrée of a multi-course feast on the first of three days in Indianapolis.

The brand-new GPG Music Stage — positioned in the stands of the venue’s south end zone — and the Fred J. Miller, Inc. Endzone on the field below featured a variety of solo, small ensemble, and full corps performances throughout the weekend. Madison Scouts’ iconic “You’ll Never Walk Alone” and Troopers’ “How the West Was Won” brought historical flair to the Lucas Oil Stadium stage.

The festival-like atmosphere of the event allowed for the opportunity to share the stories of incredible individuals across a variety of participating organizations, including Colby Brown, a marching member of Nashville, Tennessee’s Music City who lives with a degenerative eye disease.

Thursday also brought the beginning of the two-day World Judging Symposium, which pulled together the most influential minds in marching music adjudication to discuss the present and future of their facet of the activity. 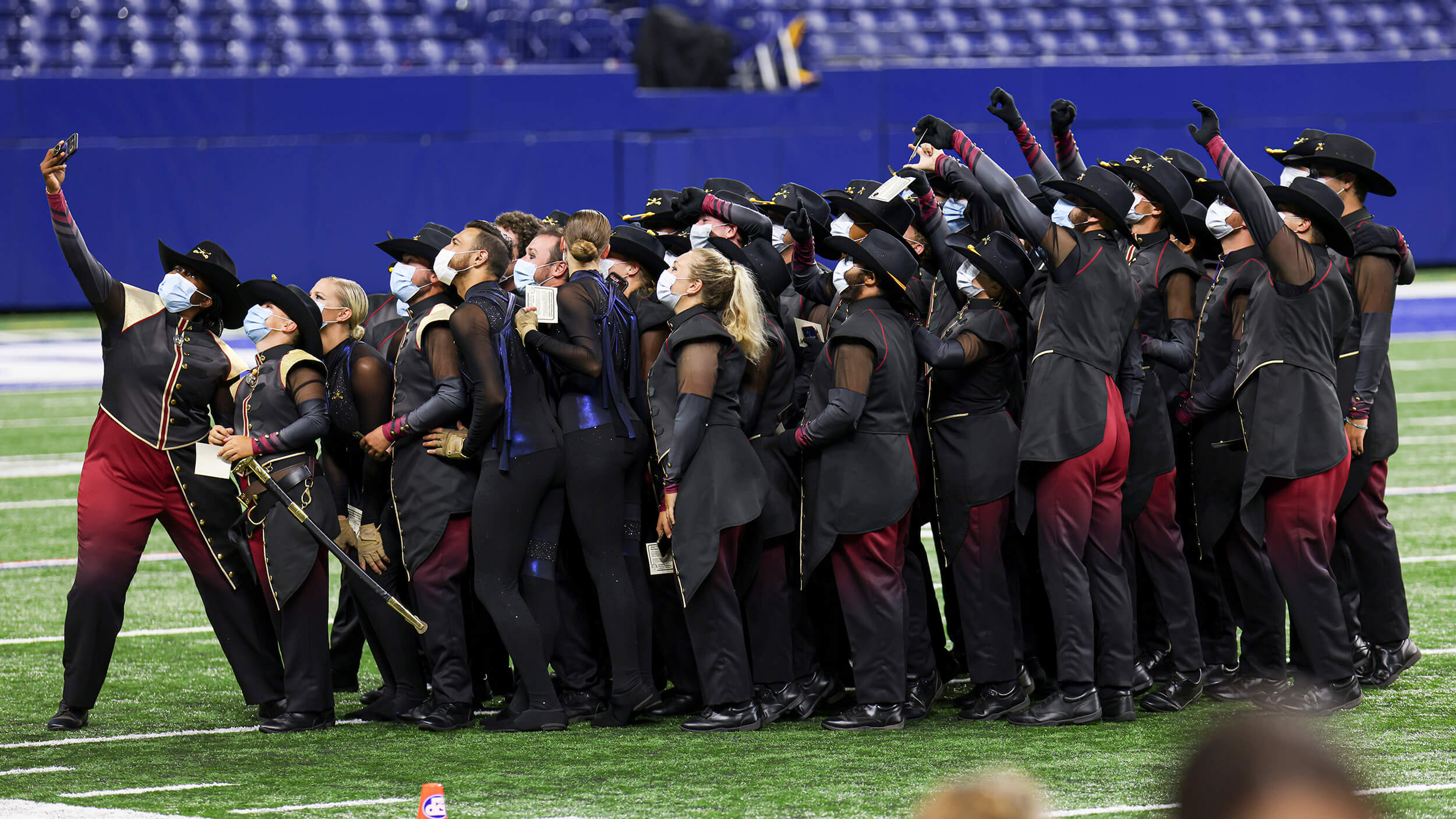 Back at Lucas Oil Stadium, feature performances and presentations filled out a jam-packed schedule as part of Friday’s “Rejoice” event, geared toward celebrating the people who make the drum corps activity special.

In blocks throughout the day of performances, graduating drum corps age-outs were saluted for their drum corps careers. As is tradition, each received a special card and pin to commemorate their achievement.

On top of his Hall of Fame recognition, Boo — who passed away in November — was honored by his former corps, The Cavaliers, with the playing of his own original composition, “Jade.”

As drum corps across the city of Indianapolis prepared for the final performances of their 2021 summer, the fall marching band flair came alive at Lucas Oil Stadium, as the University of Cincinnati Bearcat Marching Band opened the event with its own rendition of the National Anthem, as well as a full field show.

Featuring performers as young as seven years or age, the two competitors, Atlanta Drum Academy and Memphis Youth Arts Initiative, presented their talents to the Indianapolis crowd as part of the DrumLine Battle presented by Pearl Drums. After 15 minutes of electric music and crowd-pleasing performance, Atlanta Drum Academy was crowned the day’s winner, as announced by the competition’s emcee, Ray “Quazi” Nelson.

Following the intermission, The Commandant’s Own United States Marine Drum and Bugle Corps presented its always-entertaining and impeccable talents to ring in the final stretch of performances.

Focus on the 50th

Closing out Saturday’s event, DCI broadcast personality Dan Potter along with DCI Hall of Fame broadcaster Steve Rondinaro and fellow Hall of Famer member Brandt Crocker who served as the team of emcees for the weekend’s events, said final goodbyes as the logo for Drum Corps International’s 50th anniversary season lit up the stadium video boards. The parting sentiment was brief but poignant: “Drum corps is alive and well and is looking forward to its next 50 years.”

Looking ahead to the milestone, there are two ways you can act now to be among the first to be seated when the 2022 World Championships comes roaring back into Indianapolis in a year’s time.

By becoming a member of “The Friends of DCI,” fans will receive their seats in the most sought-after sections of Lucas Oil Stadium, with exclusive concierge assistance as well. Drum Corps International has expanded the benefits of membership for this popular program to include exclusive presale opportunities for a growing number of DCI tour events in 2022.

Learn more about Friends of DCI

For fans looking to lock-in their 2022 seats for all three nights of competitive action in Lucas Oil Stadium next August, the “Super 3” package is just what you’re looking for! The next-best seats to those offered exclusively to Friends of DCI members, Super 3 ticket holders will enjoy the same spectacular seats for Prelims, Semifinals and finals.