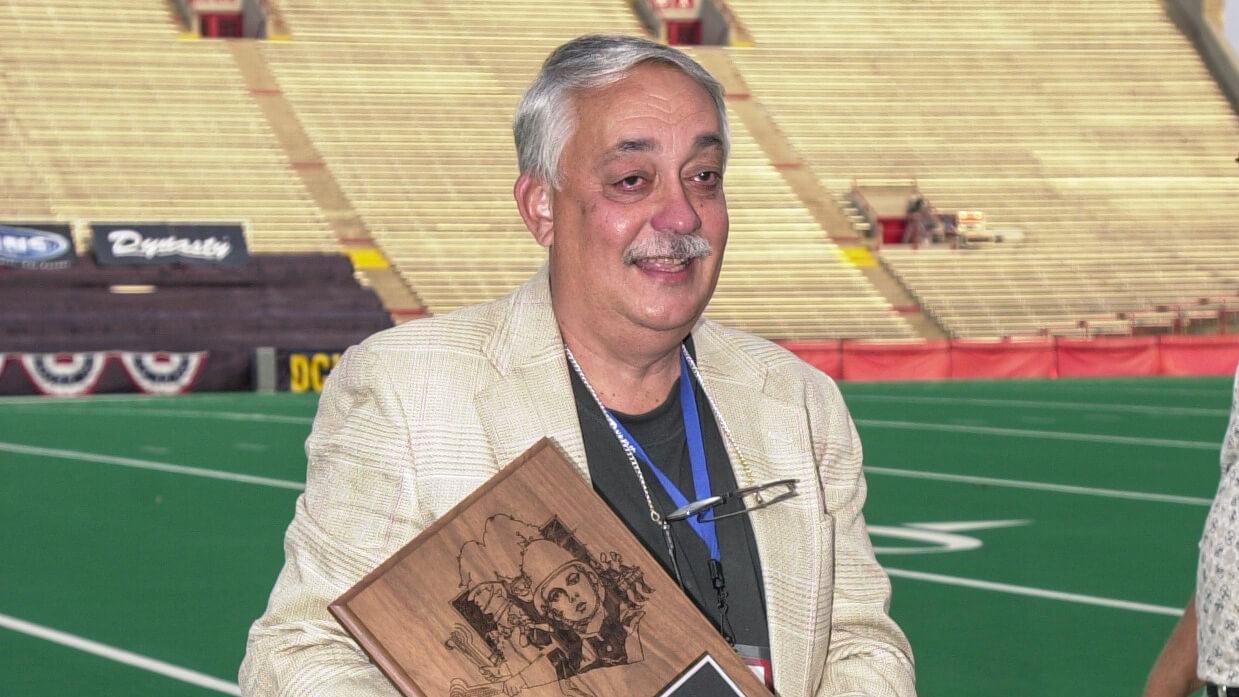 Moe Latour is inducted into the DCI Hall of Fame in 2002. Photo by: Drum Corps International

Blue Stars alumni close to Latour reported his passing. He was inducted into the DCI Hall of Fame in 2002.

“I was in one of my first manager’s meetings as a very young corps director and (Moe) asks a question,” said chair of the DCI Hall of Fame Steve Rondinaro. “I don’t remember the question, but I remember those pipes; that voice. Deep and resonant with that Cajun seasoning.”

A longtime resident of Louisiana, in 1949 Latour joined the New Orleans-based VFW Cadets as a soprano bugle player at the young age of 11. Following his “age-out” year at 21 years old, Latour went on to instruct many of the drum and bugle corps in the New Orleans area.

In Drum Corps International’s inaugural year of 1972, Latour found himself as the director of the Bleu Raeders Drum & Bugle Corps, a brand-new group based out of Kenner, Louisiana, just west of New Orleans.

The Raeders charted a meteoric rise on the competitive drum corps scene. Under Latour’s direction, the first-year group was able to finish among the elite top-12 finalists at the ’72 Drum Corps International Championship in Whitewater, Wisconsin. It was a competitive feat that wouldn’t be duplicated until Star of Indiana debuted in 1985. And in a fitting historical footnote to the accomplishment, it was Latour who was in the assistant director seat of the fledgling Bloomington, Indiana corps at the time.

“I first met Moe when he came to DCI with the Bleu Raeders from in ’72,” said DCI Hall of Fame member Brandt Crocker who served as part of the contest crew running the championship events at Warhawk Stadium in Whitewater. “He was always good about checking in and doing what was asked with the corps. I loved his accent."

That accent is what countless alumni of the Blue Stars remember of Latour. He joined the staff of the La Crosse, Wisconsin corps in 1974 after his time with the Bleu Raeders. Until 1984 he rose through a variety of roles including tour director, assistant director and eventually executive director. The Blue Stars recently posted in memory of Latour:

Each day on tour Moe would wake the membership with that soothing southern drawl of “Good mawning Blue Stars, it’s time for …” He would assist with the meals, settle disputes, and listen to staff and members alike when they needed someone to talk to. On show days Moe would lead the corps into the stadium and was at the finish line to be the first to greet us after the show. Moe was the most public face of the corps during his time with the corps.

Latour spent the 1983 and ’84 DCI seasons with the Phantom Regiment as a tour manager, before heading to the newly-formed Star of Indiana to serve as an assistant director from 1985 to 1987.

“Moe was there for that all-important first season and beyond, helping to get this brand new drum corps down the road to where we needed to be when we needed to be there,” said DCI Hall of Fame member Dennis DeLucia who worked as percussion caption head during Star’s inaugural season.

DeLucia noted that Latour was a calm and steady presence for the new group full of both rookie corps and staff members. As he put it, “Moe knew the drill.”

Further establishing his legacy as one of the unsung heroes behind the scenes of the drum corps activity, Latour continued his journey with The Cadets in 1988 as tour manager and assistant to the director.

With The Cadets, as was the case with all of the organizations he worked as a part of, Latour became an indispensable part of the corps’ family, a beloved father- and in his later years grandfather-like figure to many.

When Hurricane Katrina wrought devastation on New Orleans in 2005, Latour, who never took to email or cell phone and whose home was near the path of destruction, went out of touch for several days. An all-call went out through the drum corps community for info on his whereabouts, eventually to find that he had safely evacuated to Baton Rouge with his family.

“Moe has been sitting in bed eating cookies and drinking Diet Coke all week,” The Cadets reported to DCI.org during the nerve-racking time. “Moe saw his house in Kenner (Louisiana) yesterday, and although he will need a new roof, he had no water damage.”

In his many years with the east coast corps, Latour is remembered fondly for leading The Cadets on and off the field and of course for his unmistakable Louisianan inflections. In a time before the internet when drum corps fans kept up with the competitive results of the DCI Summer Tour either by print newspaper or simply by word of mouth, Latour is said to have been the familiar voice behind the Cadets’ recorded answering service that reported each night’s scores to the corps’ alumni, parents and fans who religiously dialed in to stay abreast of the competition.

The Cadets posted in tribute to Latour:

After a lengthy drum corps career, Moe planned to retire after the 2002 season, and The Cadets threw a big party for him, but it didn't stick. He continued to tour for a few more years. His time on tour did decrease as the years went on. By the mid to late 2000s, he had fully embraced his role as glove salesman, dutifully sitting outside the buses before shows, saying, "Gloves fuh sale," in his slow and steady cadence.

Read more about Latour’s time with the Blue Stars

Read more about Latour’s time with The Cadets