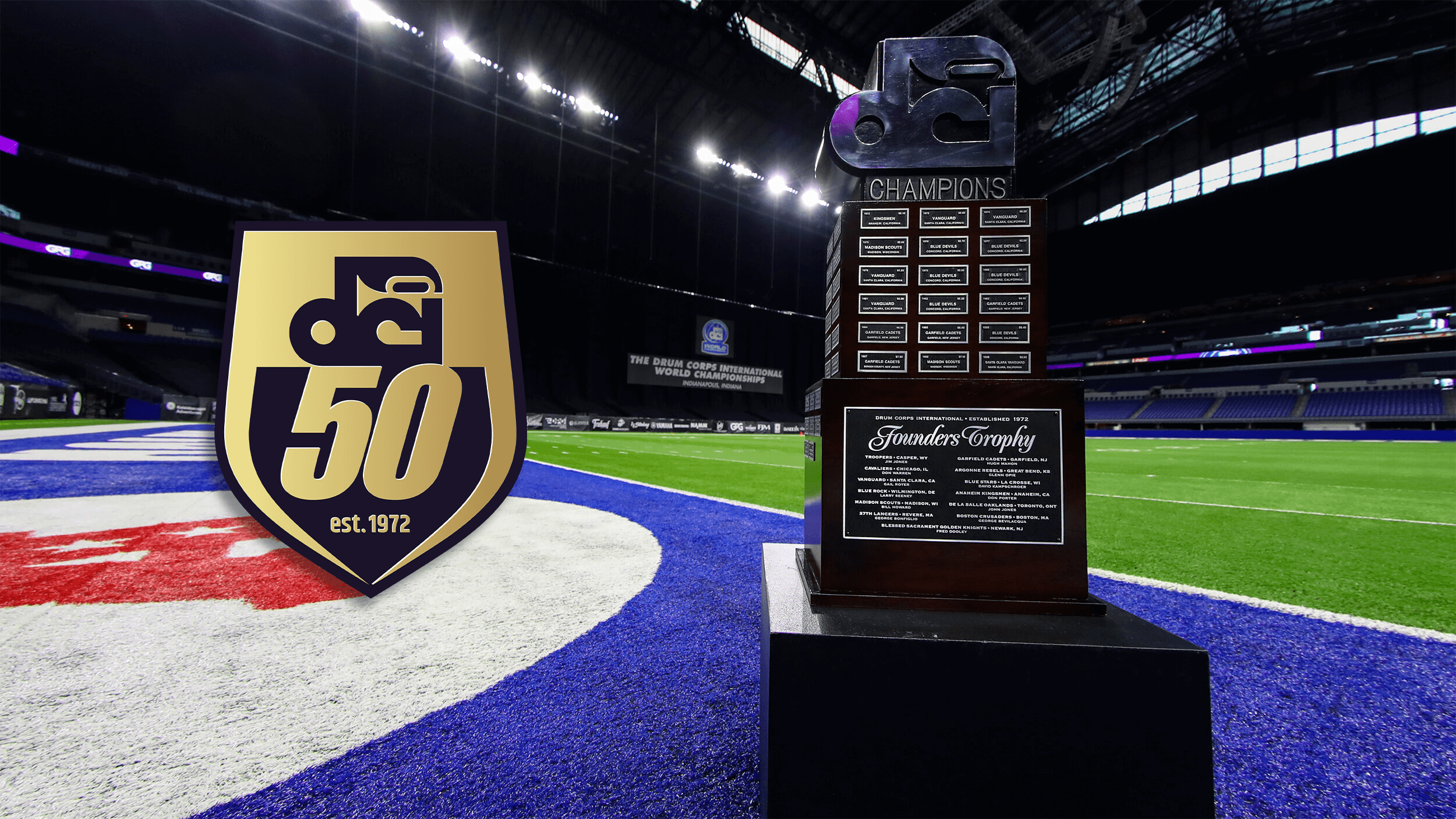 2022's race for the Founders Trophy is coming into focus.Photo by: Drum Corps International

More than a full month of drum corps is in the books.

Over 31 days of July, drum corps fans paid witness to exciting performances and a roller-coaster of a competitive landscape.

But things are beginning to come into focus. With just two weeks left and multiple “regional” events under the belt of the 2022 DCI Tour, the overarching standings are taking shape.

Primarily based on comparative head-to-head results at the DCI Tour's most recent events, here’s a quick snapshot at the World Class rankings, as they stand on the first day of August.

NOTE: This article features information specific to World Class scores due to availability of head-to-head scoring data; World and Open Class corps have yet to compete with one another in a significant capacity.

The Concord corps remains undefeated, having most recently earned a razor-thin victory Saturday in Atlanta, Georgia of just 0.175 points. Previously, Blue Devils’ slimmest margin of victory had been 0.85 points, July 27 in Hattiesburg, Mississippi.

Blue Devils did not perform at Sunday’s event in Winston-Salem, North Carolina due to weather safety concerns.

A strong showing in Atlanta placed the Boston corps within perceived striking distance of the top spot, with caption wins in total visual and total music to boot. Boston Crusaders has earned three consecutive head-to-head victories over Carolina Crown and four over Bluecoats, dating back to July 23 in San Antonio, Texas.

While Boston Crusaders have held serve in second place over the past week, there was a bit of shuffling between third and fourth positions. Carolina Crown, based on its most recent result in Atlanta, theoretically holds the third spot.

Bluecoats have continued to remain within reach of the top-three scoring corps, including the corps’ head-to-head outscoring of Carolina Crown in Murfreesboro. Most recently, Bluecoats put up a strong showing head-to-head with Boston Crusaders, slashing its deficit behind the Boston corps from 1.60 in Atlanta to 0.825 Sunday in Winston-Salem.

While The Cadets and Blue Stars have only had two head-to-head meetings this summer, and the date from the two corps’ most recent meeting is now over a week old, the Allentown corps outscored its La Crosse, Wisconsin counterpart in both meetings, by 0.2 and 1.413 respectively.

Blue Stars’ next opportunity to compete head-to-head with The Cadets and take aim at a top-six position will be August 6 in Allentown, Pennsylvania. Most recently, the Wisconsin corps has kept a strong hold on its seventh position, consistently outscoring the likes of The Cavaliers, Phantom Regiment and Mandarins by one or more points in recent events.

The race between eighth, ninth and tenth places has been airtight in recent days; Saturday in Atlanta, just 0.55 points separated The Cavaliers, Phantom Regiment and Mandarins. On the recency of those results, The Cavaliers hold the eighth spot entering August, but have two corps right on their heels competitively.

Phantom Regiment turned heads Saturday in Atlanta when it outscored Mandarins head-to-head for the first time this summer, by a gap of just 0.05. Previously, Mandarins had defeated Regiment twice on the 2022 DCI Tour, but the newest data available places the Rockford corps in ninth entering the final two weeks of the season.

Mandarins, as mentioned above, still remain within close striking distance not only of ninth place, but of eighth place as well, having earned head-to-head wins over both The Cavaliers and Phantom Regiment at points this summer. Either eighth or ninth place would set an all-time best placement for the Sacramento corps.

Sunday’s event saw significant shuffling around the DCI World Championship Finals Top 12 cutoff line, with Colts outscoring Blue Knights head-to-head for the first time since 2008 and effectively moving into 11th position. If it can hold serve in either 11th or 12th place, the Dubuque, Iowa corps would earn its first finalist berth since 2007.

With its competitive finish Sunday in Winston-Salem, Crossmen moved into the proverbial 12th position with its head-to-head victory over Blue Knights. A 12th-place finish would mark Crossmen’s seventh-consecutive Top 12 ranking.

Blue Knights remain within striking distance of the Top 12, just 0.625 points behind Crossmen — and 1.075 points behind Colts — at Sunday’s event. Nothing is set in stone yet, as the Denver corps owns multiple head-to-head victories over both Crossmen and Colts.

While the Casper corps’ deficit from Blue Knights grew in Winston-Salem, recent events have seen Troopers score within relatively close proximity to the Top 12. A 14th-place finish would be Troopers’ highest final ranking since 2016, and an improvement of four placements from its 2019 finish.

At Madison Scouts most recent meeting with Troopers, the two were separated by just over three points July 25 in Mesquite, Texas. The Madison corps can earn its highest ranking since 2017 should it hold serve in 15th place.

The Arizona corps made up ground on Madison Scouts Saturday in Atlanta, pulling within 0.85 points after seeing a deficit of 2 points July 23 in San Antonio. The Academy has outscored Music City in all three of the corps’ head-to-head meetings, by an average margin of 0.891.

Music City is poised to see its highest final ranking ever, pending the inclusion of Open Class competitors into the competitive mix at the DCI World Championships; the Nashville corps has never finished higher than 21st in its 14 years of existence. Music City outscored Pacific Crest by 1.225 points July 23 in San Antonio.

In Pacific Crest’s two head-to-head meetings with Genesis on the 2022 DCI Tour, the southern California corps earned margins of victory of 1.7 and 4.05 respectively.

Genesis and Jersey Surf have yet to meet head-to-head on the 2022 DCI Tour, but average scores at recent events would suggest this order in the overarching rankings; Genesis’ most recent score was a 72.450, earned in Atlanta.

Jersey Surf will have its first opportunity to compete head-to-head with Genesis and Pacific Crest on August 6 in Allentown. Most recently, the New Jersey corps earned a score of 67.600 Sunday in Winston-Salem.