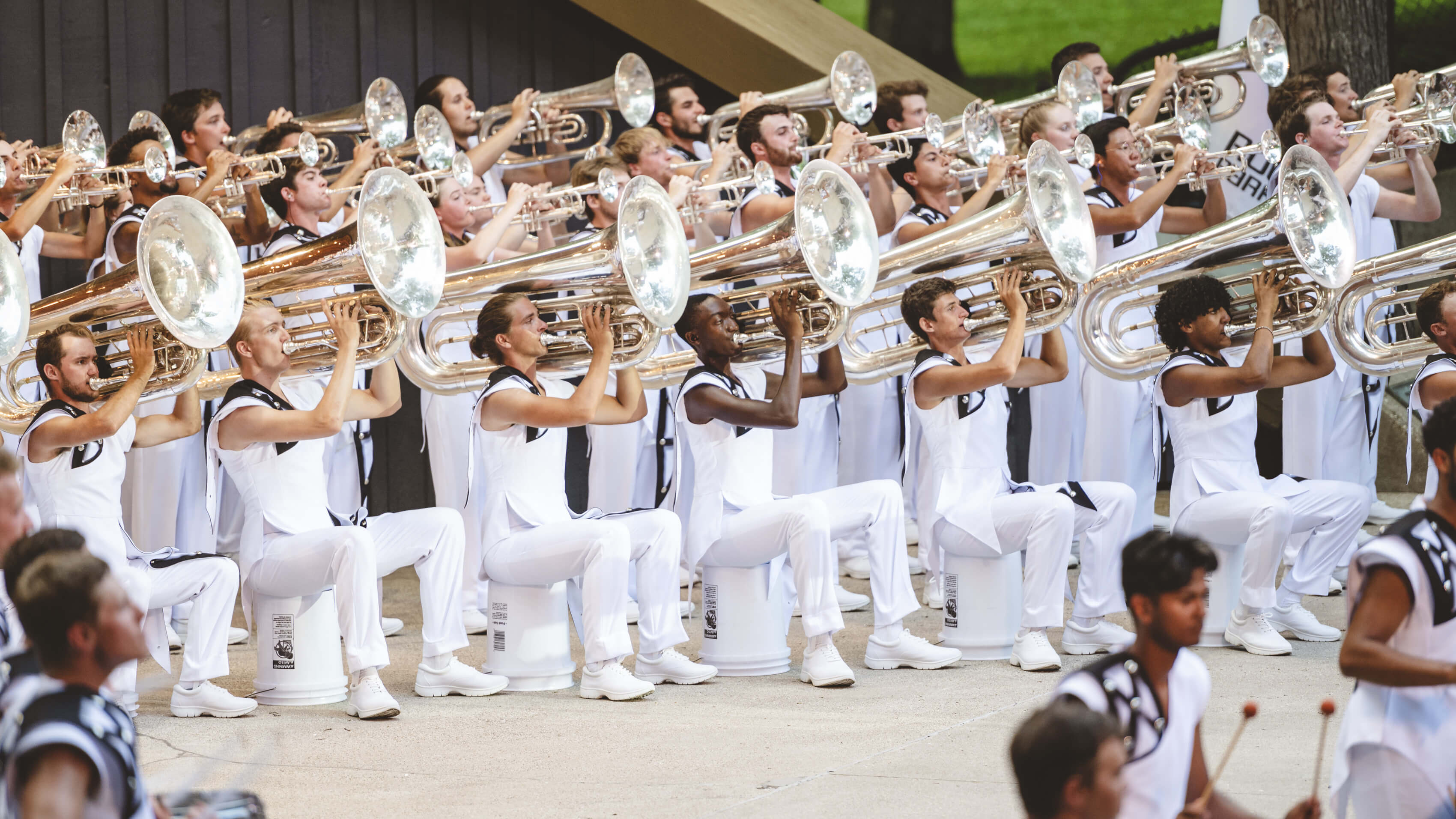 Members of Phantom Regiment perform at the corps' Concert in the Park in Rockford, Illinois.Photo by: Drum Corps International

Since late May, Phantom Regiment had been plugging away through spring training rehearsals in Evansville, Indiana.

The corps’ rehearsal site was about a 360-mile drive — give or take, maybe six hours — from its Rockford, Illinois headquarters.

But, in line with the foundational theme of Regiment’s 2022 production, getting to be back home is always worth the trip. When the corps wrapped up its pre-season rehearsals in Evansville and made the trek to Rockford’s Sinnissippi Park for their annual Concert in the Park event Tuesday night, a friendly and excited hometown crowd was waiting with open arms.

“We've always been based in this area; We have so many alumni and fans and friends in this area,” Regiment CEO Todd Snead said. “So, it's really important for us to be here and to be community ambassadors.”

The concert featured much of what the corps spent nearly a month working to perfect, including percussion warmup passages and presentations of Regiment horn line staples like “Nessun Dorma” from "Turandot" and Richard Wagner’s “Elsa’s Procession to the Cathedral.” Fans in attendance were also treated to a performance by Regiment’s youth percussion and color guard ensemble, Rockford Rhythm.

But the keynote presentation of Regiment’s concert, of course, was a full standstill run-through of the corps’ 2022 production, “No Walk Too Far.”

“We really needed to get the chance to show off what we've been working on for the past five weeks,” conductor Keri McCourt said.

Regiment’s program is themed around the idea that, no matter how far one strays from its home, the return is always worth it.

Learn more about Regiment's 2022 program, "No Walk Too Far"

“What resonates to me about this show is the individual stories that come from it,” McCourt said. “This is not about any specific story. This is about every individual member in the Phantom Regiment and in the audience. This is about our story and our journey.”

“No Walk Too Far” is a product of a largely new — but, in some ways, not so new — team of designers. 2022 marks the first competitive production for Phantom Regiment since brass arranger J.D. Shaw’s 2020 return to the corps’ staff; Shaw previously worked with the Rockford corps from 1993-2011 in instructional and design capacities.

Beyond having new sets of fingerprints on the corps’ programming, Regiment is fresh off of a memorable summer in 2021; the corps reprised its 2003 production, “Harmonic Journey,” and was met with positive fan feedback as a result.

All things considered, those in Regiment’s camp feel there’s plenty of momentum behind the corps as it prepares to kick off the 2022 season.

“Everything this year is building on that and not missing a step, and taking the next step forward,” he added.

Corps members also had the opportunity, recently, to see the corps’ 2022 uniforms up close and in person, before wearing them publicly for the first time. Prior to the in-person reveal, all that had been seen of the corps’ costuming was in the form of drawings.

Once the uniforms were revealed, excitement hit a new gear.

“Everyone went crazy in the best way possible,” McCourt said. “We were just so excited to be able to put them on.”

Ultimately, according to Snead, performers and staff members are excited to hit the road and begin competitive summer touring for the first time since 2019; spirits are high, and confidence is building.

And luckily, with Regiment’s debut performance at the DCI Tour Premiere pres. By DeMoulin Bros. & Co. — in Detroit, Michigan and cinemas nationwide — set for June 28, the wait won’t be long.

“Our members and staff have really dug into the content and are really trying to own it, and they're not making any excuses,” Snead said. “They're really hungry to be incredible this year and be competitive this year.”

Posted by Drum Corps International on Monday, May 23, 2022