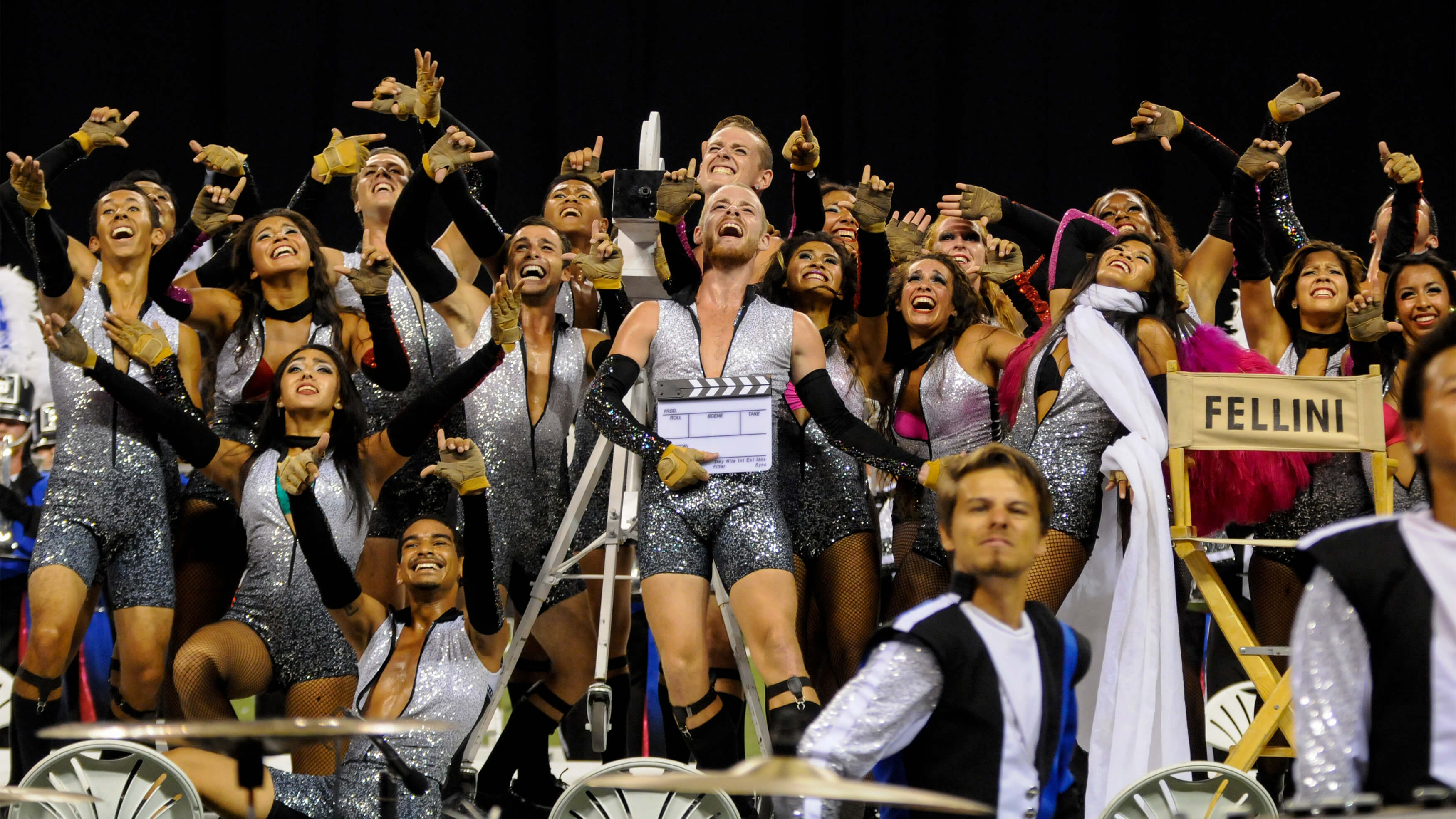 Blue Devils’ 2014 program sucked audiences into the world of filmmaking from the moment the corps took the field.

Like many of the Concord corps’ productions of the early- and mid-2010s, the Blue Devils found a way to put their prop-design fingerprints on a unique universe, taking the many recognizable pieces of a film set—cameras, lighting equipment, stages, clothing racks, and more—and giving them the corps’ iconic all-white prop motif.

As light front ensemble tones of Danny Elfman’s “Old Toys” set the stage, the sounds of winding film reels echoed in the background. It was those subtle details that made it clear; the Blue Devils were on set, and they were—in more ways than one—rolling. 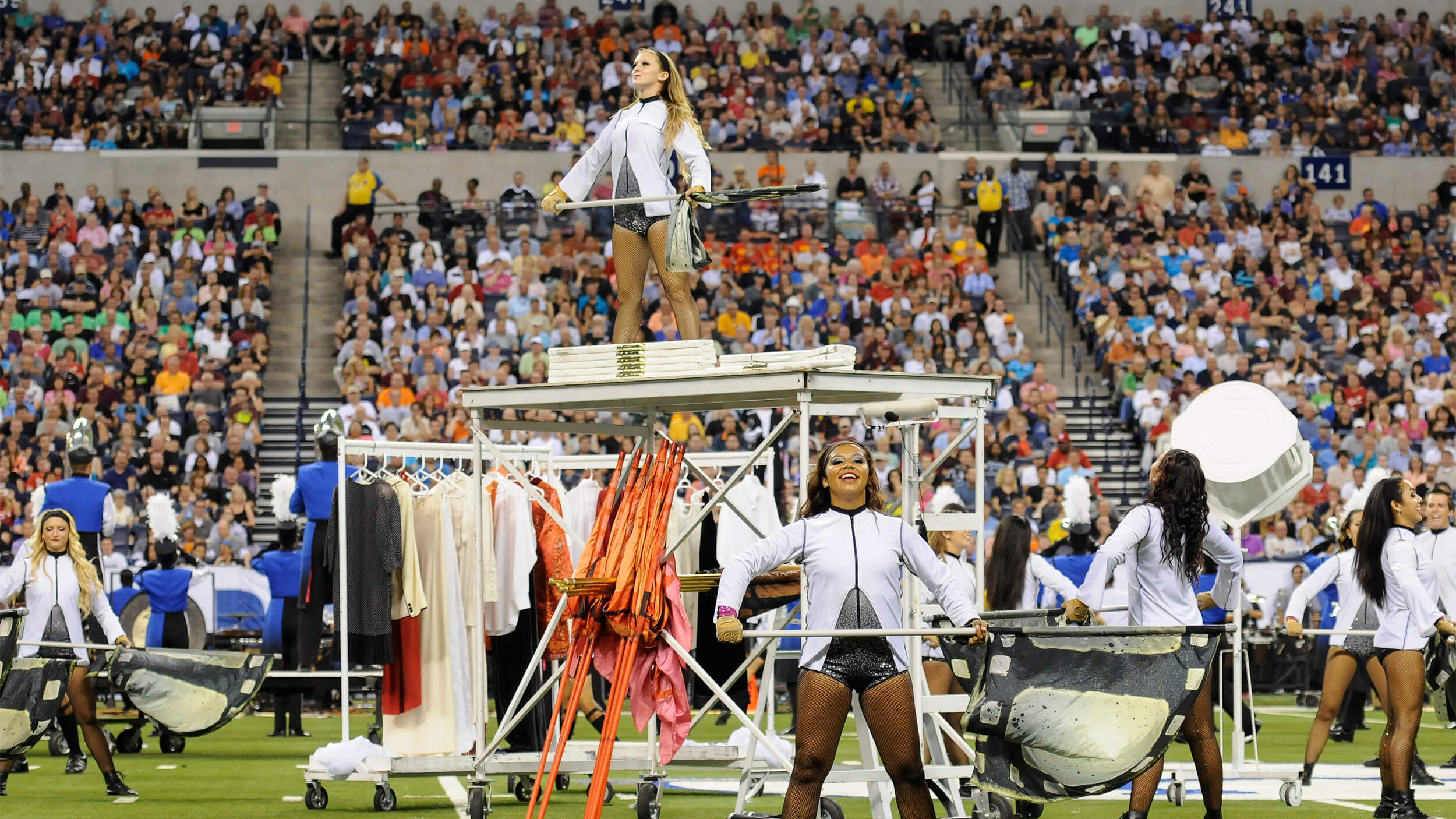 But the production wasn’t simply about cinema; it centered on one of the industry’s true titans. It was “Felliniesque.”

For background, Federico Fellini, Blue Devils’ figurehead for their 2014 program, was an Italian film and screenwriter of the 20th century. Fellini was nominated for 17 Academy Awards between 1946 and 1992, and won four, including three wins for Best Foreign Language Film. In 1993, the year of his passing at age 71, Fellini was recognized by the Academy with a Lifetime Achievement award.

Blue Devils were, clearly and understandably, quite inspired by his nearly 50 years of work.

In 2014, the Blue Devils’ corps proper wore an updated version of what it had been presenting for a number of years. It was still primarily blue on top with black pants, it still featured a shako with a tall white plume and a shining metal square on the front.

But 2014’s edition featured updated color paneling in the jacket, as well as touches of red specific to the program, as 2015’s “Ink” featured the same uniform updated with orange and pink trim. As for the color guard, the costuming featured bright, sequined, neutral-colored body suits.

Musically-speaking, “Felliniesque” features a litany of astounding moments, but is often remembered for its very first notes.

A strong full-corps impact followed the feature moment, before immediately seguing into up-tempo sequences that put the corps’ perfect visual score on display. In somewhat of an unorthodox manner, though, “Felliniesque” entered its “ballad” within the first four minutes of the show, as beautiful melodies of Nino Rota’s theme from “La Strada” cascaded into the stands.

The cut-off of the powerful movement signified the end of Act I, before quickly switching gears to the zany environment of Act II, titled “Fellini’s Circus,” which featured Nino Rota’s “The Clowns” and Gordon Goodwin’s “Circo Compagnia.”

Each section of the corps got its moment in the sun during Act II, as the middle portion of the show featured multiple pristine brass features, a driving percussion break, and a crowd of color guard members using tambourines as their “weapons” of choice.

And of course, Blue Devils’ final push in Act III, “Fellini’s Fantasy,” was one for the books. It opened with a company front pointed toward the back right-corner of the field, before brass players followed the leader through the shape of a film strip and ended up in a rotating straight line along the 30-yard-line on stage left. 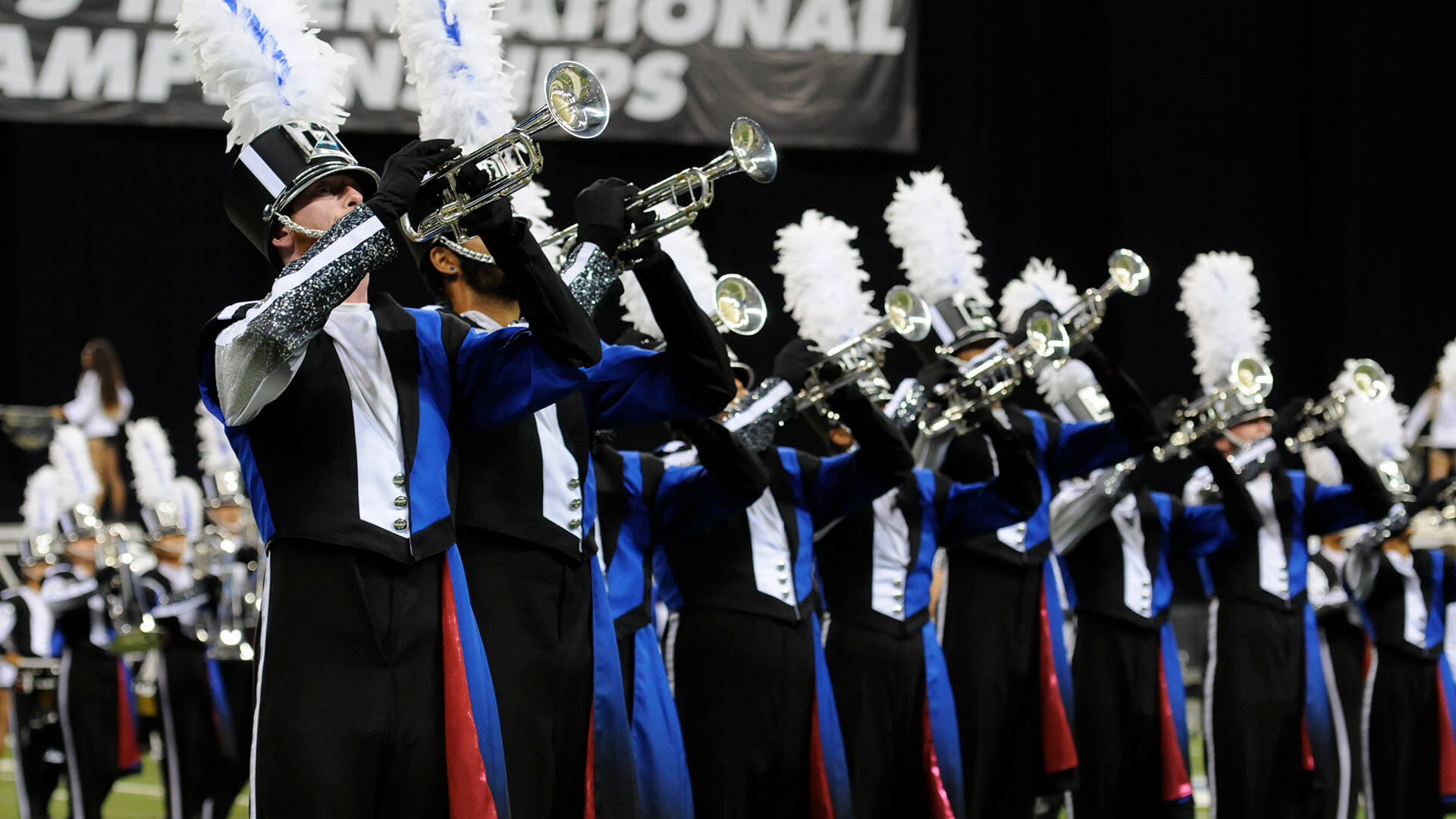 Out of that line, sections of the corps poured out in different shapes and forms, all making their way toward a tight block to the end the show. The closing moments continued to drive toward the finish line, as rising chords ratcheted up the energy with each impact.

Fellini’s personality and work remained stamped on the show even into its final moments. Late in the 2014 season, the corps added a few counts to its ending, breaking out of its block for a moment of visual scatter. All the while, Fellini’s voice, and the sounds of, theoretically, his many film reels—the visual representation of these reels also rippling across the performing surface in the form of long, thin flags—echoed throughout Lucas Oil stadium before the brass and battery percussion re-entered to bring the show to its completion.

A Race Against History

Statistically speaking, the Blue Devils went the entire 2014 season without much of a competitive race. The race for second and third places—held by Bluecoats and The Cadets, respectively—came down to the last day of the summer, but the Concord corps was in a league of its own from start to finish.

"It's all about continuing the legacy," 2014 drum major Kristen Lichtenthal said. "It's what we've done for years and what we hope to do in the future.

For starters, Blue Devils opened the season with a score of 73.200, and were already more than three points ahead of their closest head-to-head competition; that was the Santa Clara Vanguard, which earned fourth place in 2014.

Once all of the top competitors met in mid-July, the Blue Devils were already a full point over the field, and that gap only grew. By the time everyone convened in Atlanta on July 26—two weeks before the season’s completion—Blue Devils already held a lead of 1.4 points, and had already surpassed 95 points. For perspective, the highest Atlanta score recorded since 2014 is 93.762, earned by the Bluecoats in 2019.

2014’s silver medalist, the Bluecoats, finished the season with a score of 97.175. Blue Devils were already above that mark with a week to spare, tallying a score of 97.550, August 3 in Buffalo, New York. The corps opened the DCI World Championships with a score of 98.550 and a lead of nearly two points, and by Finals night, ballooned their advantage all the way to 2.475 points, all while notching the all-time record score of 99.650. 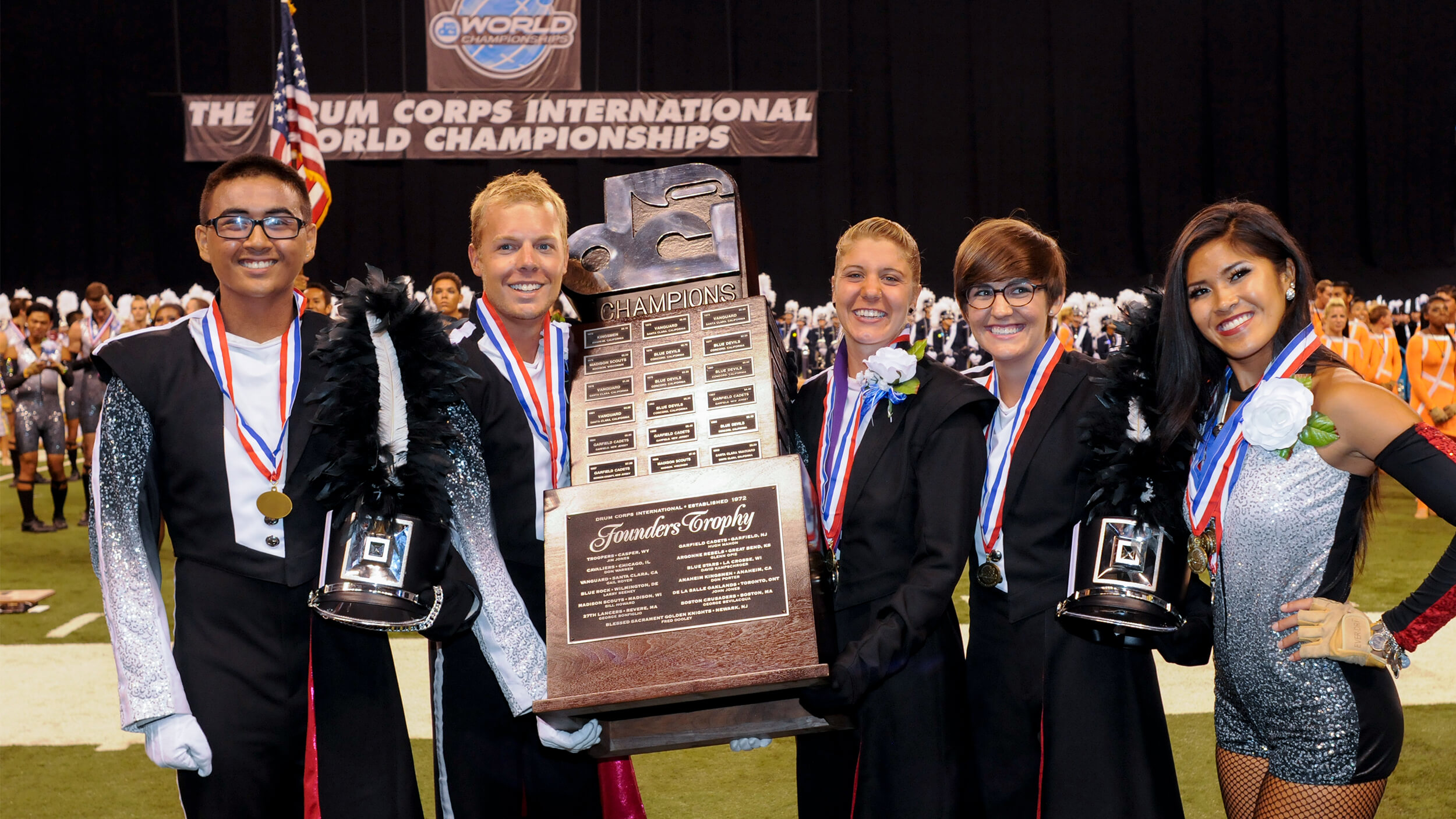 The craziest part of it all, though, may be that Blue Devils did not sweep all five caption awards at 2014’s World Championship Finals, as Santa Clara Vanguard won the first of what would go on to be five Fred Sanford Awards for Best Percussion Performance in six years.

Was “Felliniesque” the greatest show of all time, though? It’s a question that will forever be impossible to answer. Superlatives in art are subjective; tastes and opinions eternally variable.

But the show’s statistical greatness is undeniable, and of all the “unbreakable records” that exist in sports and competition, Blue Devils’ 99.650 stands among the best of them.