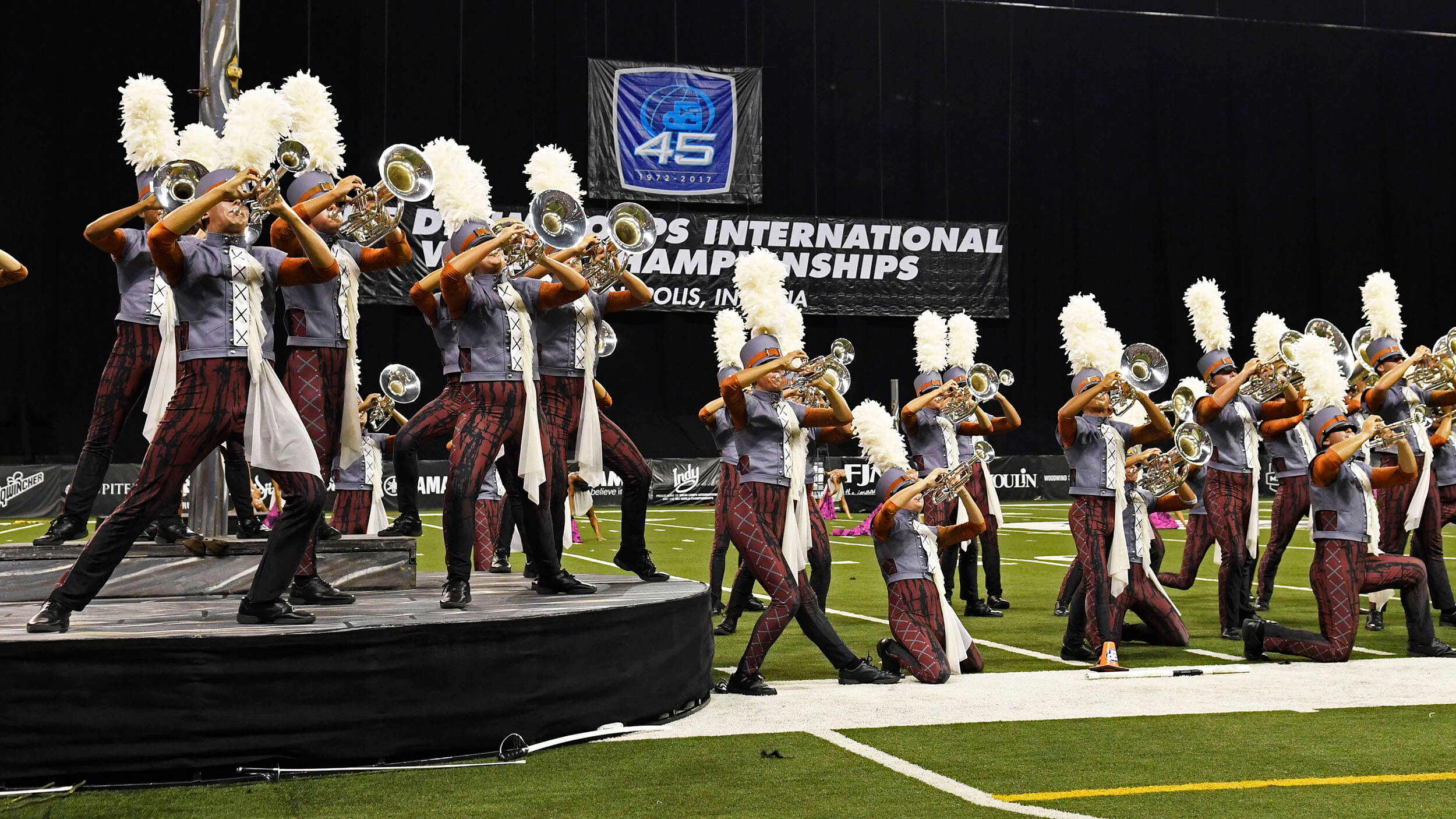 The east coast corps lit the drum corps universe ablaze in 2017 in many ways. A memorable competitive season for Boston featured a dark and intense production that consistently brought audiences to their feet in roaring applause.

But amidst a fiery streak of competitive milestones that changed the DCI competitive landscape for years to come, arguably the corps’ hottest highlight of its breakout season first appeared at that July 8 event in the heart of the sunshine state.

At the tail end of an intense production based around the 17th-century Salem Witch Trials — from which subsequent witch-burnings ensued — Boston Crusaders unveiled a multi-dimensional prop effect, as one of its many stages opened up to reveal fabric designed to look like rising flames.

By that point, “Wicked Games” was already a crowd favorite, but the attention-grabbing addition kicked things even further into gear. And — if they weren’t already — it placed Boston Crusaders on the map.

“It just puts the icing on the cake,” Boston Crusaders staff member Michael Townsend said that night in Orlando. “The energy is clearly obvious, the performers are so into what they're doing and they understand their role and their character within the show. They're just having a blast out there.”

Boston Crusaders came out in a very unique look for 2017; “Wicked Games” marked a full departure from the corps’ iconic red, black and white color scheme.

The Boston corps stuck with a relatively traditional build in terms of its base uniform pieces — a shako, plume, jacket, and pants — but embraced a Salem-esque aesthetic for coloring, with wooded and autumnal colors and textures to match its overall visual design.

Jackets were a medium gray and sleeveless, with burnt orange half-sleeves extending from underneath. A white, flowing fabric descended from the corps’ left shoulder past its waist, where it met rustic, maroon-colored pants. Shakos matched the jackets’ gray color, with a burnt orange belt across the bottom and a tall white plume to match the color of the jacket’s accent fabric.

Color guard members, dressed and characterized as the story’s “witches,” wore white dresses with gray accents. Gray, wooden prop stages were scattered throughout the field, with tall, wooden pillars standing up from each.

“We saw an image early on, it was like a full moon and the kids came out of their houses from all around,” Crusaders artistic director Keith Potter said in describing inspiration for the corps’ color guard costumes. “And they all kind of congregated in the woods and they were having this ritual, this dance — kind of a more pure, young, innocent look, but it’s got a magical and very simple, youthful, peasant kind of look.”

Based on the general feeling, sound and chosen music of the show’s opening moment, “Wicked Game” appeared to begin in the middle of the night, out in the remote forest, with a scene like the one Potter described.

A mysterious and chilling initial soundscape of chirping insects, distant howling wolves, laughing young women and music box-esque melodies of Beethoven’s “Moonlight Sonata” set the stage for a meeting of color guard members — who were dressed and characterized as the story’s “witches” — at the field’s center.

The color guard’s circle was eventually enveloped by a large pentagram shape, made by the corps’ horn line and battery percussionists, at the climax of its build to an opening statement of “Moonlight Sonata.”

Once the impact was released, “Wicked Games” picked up in tempo and intensity, with Boston’s seventh-place percussion section on full display. Driving percussion passages that toggled between triplet-based and duple-based rhythms set the tone for a ritualistic-like movement of dissonant and hectic music.

Simply put, in their brief second movement, the 2017 Boston Crusaders took Prokofiev’s “The Adoration of Veles and Ala (from Scythian Suite)” and turned up the volume to 100.

The movement that followed, though, was far more sinister, and pushed the production’s timeline further into the stories of “witch hunts” that plagued late-17th century New England. The original movement, titled “Whispers,” opened with sounds of whispering individuals and the reprisal of the “Moonlight Sonata” theme.

Quickly, the “whispers” turned into dark, angry and accusatory narrations the likes of which included, “Blasphemy!” and, “It was her… she did it!” Boston’s percussion section was once again on full display as the movement’s early soundtrack. From there, the hunt was on, as intense and gut-punching staccato brass and percussion interplay embodied the tone of a society riddled with confusion and anger.

The chaos quieted for a moment during the show’s fourth movement — its ballad, which featured American rock musician Chris Isaak’s “Wicked Game,” and the vocal talents of one of the corps’ color guard members and main characters. As would correlate with the song’s feeling and lyrics, the ballad was a breath of raw emotion within the otherwise dark, cold and angered previous movements.

The main character and vocalist, during her featured ballad, pulled one of the members of the horn line under her spell and placed said member into captivity in the stocks — a form of medieval punishment for criminals. By movement’s end, though, the main character found herself in the same captive state, before being freed by a fellow color guard member as the show transitioned into its final movement.

With narrative echoes of “Get her!” the hunt was once again on, as those in power within the story aimed to, once and for all, capture the individuals they believe to have been wreaking witchcraft upon their community.

Ultimately, they succeeded, and were seen capturing one color guard member, who was then put on trial — narrations of charges, verdict and punishment signified the impending conclusion of the show’s story: “…pain of death, for your wicked games.”

And if the voiceovers weren’t clear enough, the corps spelled it out, marching in simple block letters — G-U-I-L-T-Y — before driving the show home to its final impact chords.

Boston Crusaders then packed every ounce of energy it could into the show’s final 60 seconds, all building toward one red-hot final punch. Finally, one last narration put into words one of the summer’s most eye-catching and memorable visual spectacles, which resoundingly signified the story’s harrowing conclusion.

Now, she must burn.

Just one year prior to 2017, the Boston corps found itself narrowly sneaking into the Top 12 and, by the skin of its teeth, extending its streak of Finals appearances to 18.

In 2017, though, there was no doubt as to the corps’ finalist status. Boston Crusaders opened the summer on a tear, outscoring numerous corps it had scored behind in the previous season, and scoring within striking distance of others.

One by one, the Boston corps made its way up the rankings. By the time major regional events rolled around and World Class corps were all together under one competitive heading, Boston Crusaders had rolled all the way into sixth place, ahead of The Cadets — who spent the bulk of the summer in seventh — for what was, at that time, the first time in over 30 years.

From mid-July to season’s end, the Boston Crusaders weren’t in much of a close race in either direction, up or down. Once the corps reached sixth place, it solidified itself there, and spent most of the summer on a proverbial island in said placement.

2017 Boston’s competitive strength — color guard — still rings true to this day. For Boston Crusaders, the vast majority of its final caption scores landed in either sixth or seventh, but the corps earned a stunning third-place finish in color guard. A year later, it would win its first George Zingali Award for Best Color Guard.

“I believe it was two years ago that the board of directors announced that B.A.C. officially stands for ‘Building A Champion,'” Boston mellophone age-out Justin Kline said during the 2017 DCI World Championships. “I believe we're well on our way to achieving that goal of a championship title in the next few years.”

“This was only the beginning,” he added. “We're going to go nowhere but up from here.”