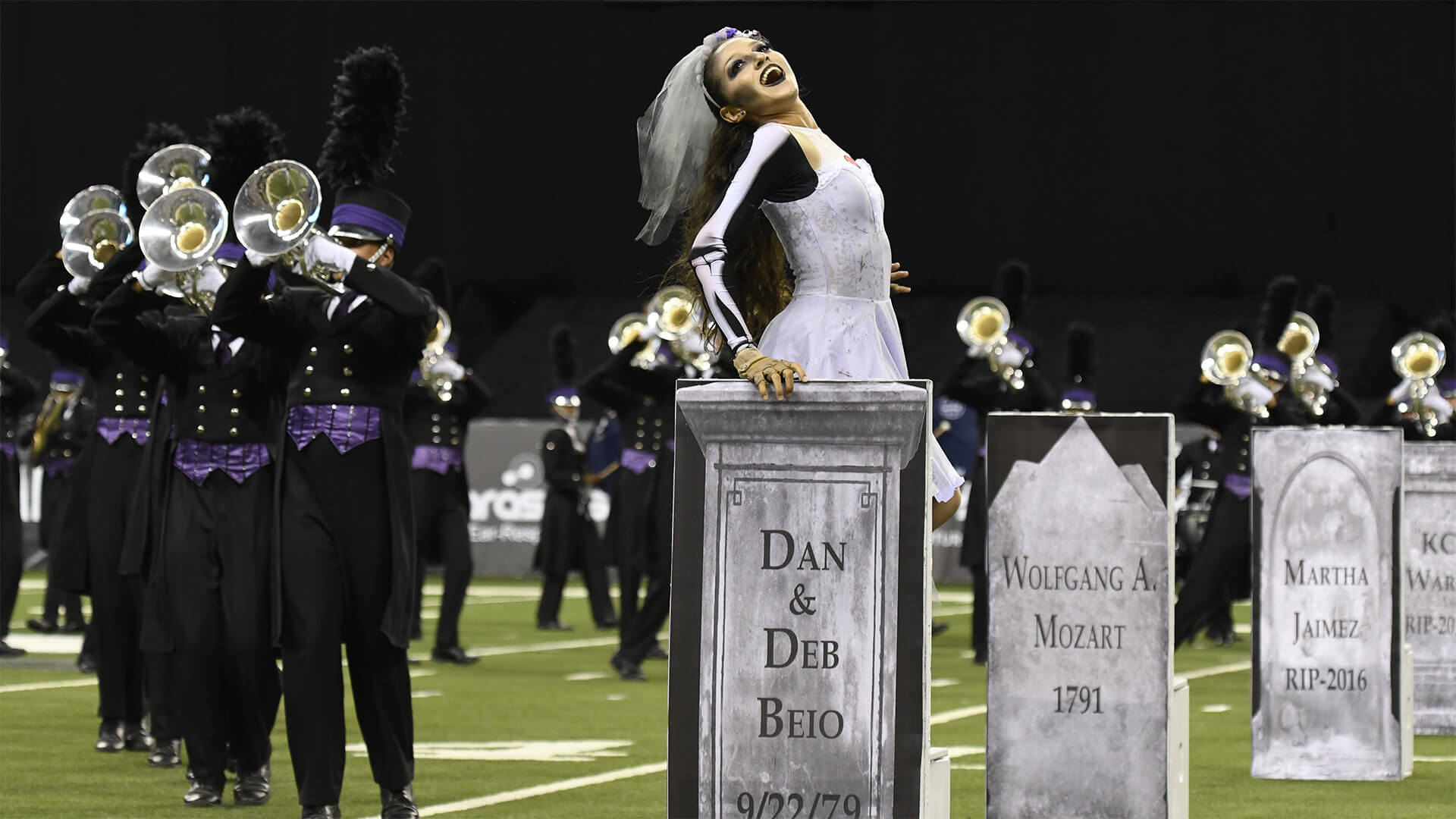 The AcademyPhoto by: Drum Corps International

The Academy’s 2016 production was pure delight; the eccentric love story of the “Drum Corpse Bride” captivated fans all season with its quirky charm.

Arguably, the most effective thematic visual element of the show was the 40 tombstones that appeared when church pews from a wedding depicted at the start of the program were turned around to change the scene before our eyes to a spooky graveyard setting.

“The design team started with the idea that we wanted to have these chairs that together would look like wedding church pews. We found a design for a flat-back chair that would work functionally and aesthetically,” Academy Executive Director Mark Richardson said. “In looking at the backs, we realized we could use that space to display a tombstone. From there, we just had to figure out the execution and timing of when the props would move from pews, to tombstones, and back again in a way that would follow the programmatic arc of the storyline.”

Each gravestone originally depicted a name; many that were nods to television programs and movies.

According to Richardson, “We talked for quite some time about whom we would list. We thought it would be funny to feature famous names of historical individuals familiar to those within the drum corps activity. But we could not control who might be flattered or insulted by the idea, and doing so would not necessarily elevate the concept. So, I began to search for the names of famous couples in literature, movies, folklore, etc. A simple search of ‘famous love stories’ resulted in a wide range of characters, both historical and fictional.” 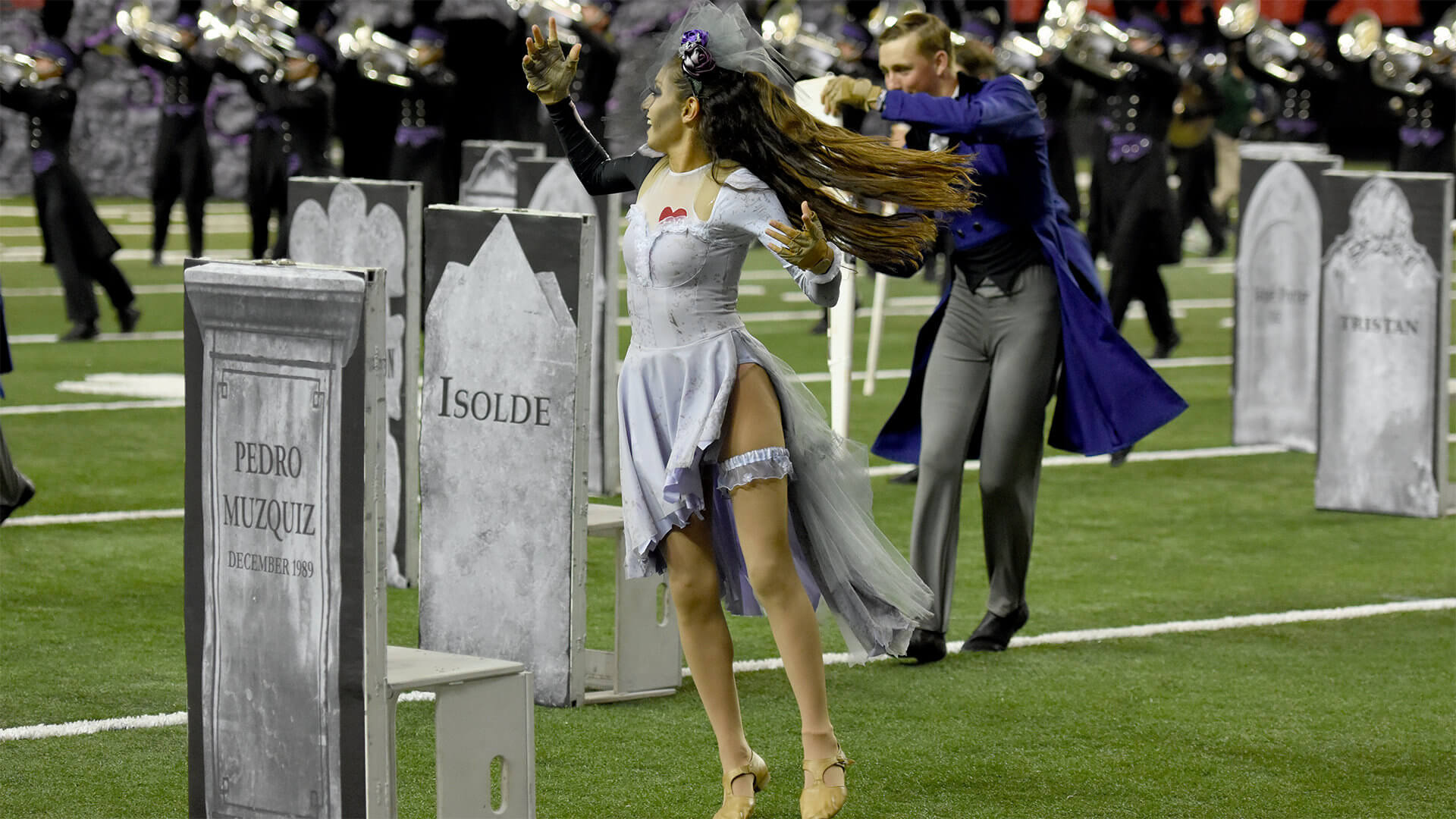 The results? Gravestones ended up featuring a number of television twosomes from Lucy and Ricky Ricardo from “I Love Lucy” to Sam Malone and Diane Chambers, Ted Danson and Shelly Long’s characters from “Cheers.” “Death” dates on the tombstones depicted the airdates of the final episodes of those series.

Other pop culture and historical power couples included Harry Burns and Sally Albright from “When Harry Met Sally,” Aphrodite and Ares, Samson and Delilah, and even the lovable pooches Lady and the Tramp from the 1955 Disney animated classic.

As the season progressed, Academy staff members had the idea to turn this popular element of their show into a fundraiser, offering the opportunity to feature the names of donors, people who would pay to have names of their choice presented on the gravestones. The corps publicized the idea, and of the 40 gravestones, 28 were “re-imagined” by 16 different donors.

With their contributions, donors didn’t necessarily want to feature their own names out on the field; rather they decided to honor inactive historic drum corps. That’s why astute audience members may have spotted gravestones for the Anaheim Kingsmen, Argonne Rebels, Star of Indiana, 27th Lancers, Royal Lancers, Sky Ryders and Bridgemen. 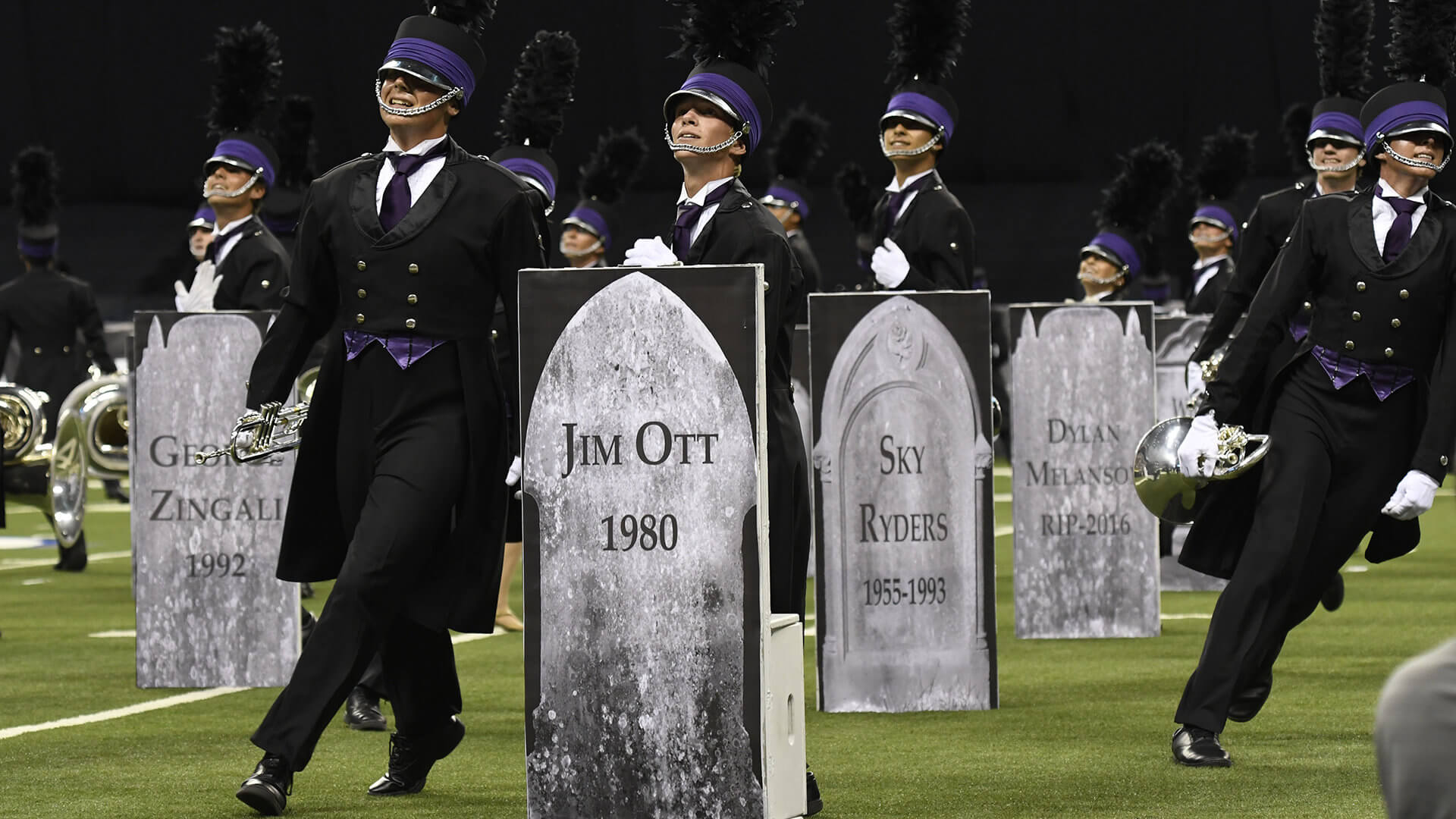 The sponsored gravestones didn’t appear until the World Championships in Indianapolis, and upon the end of the corps’ most successful season to date, each of those gravestones were sent to their respective sponsors as a keepsake memento of the season.

The remaining stones were altered and named for the corps’ 11 age-out corps members. And that left one gravestone to be renamed, and the staff ultimately decided not to rename it at all.

“We thought it fitting that a name from the most famous love story should remain on the field,” Richardson said. “So, Romeo Montague finished out the season.” 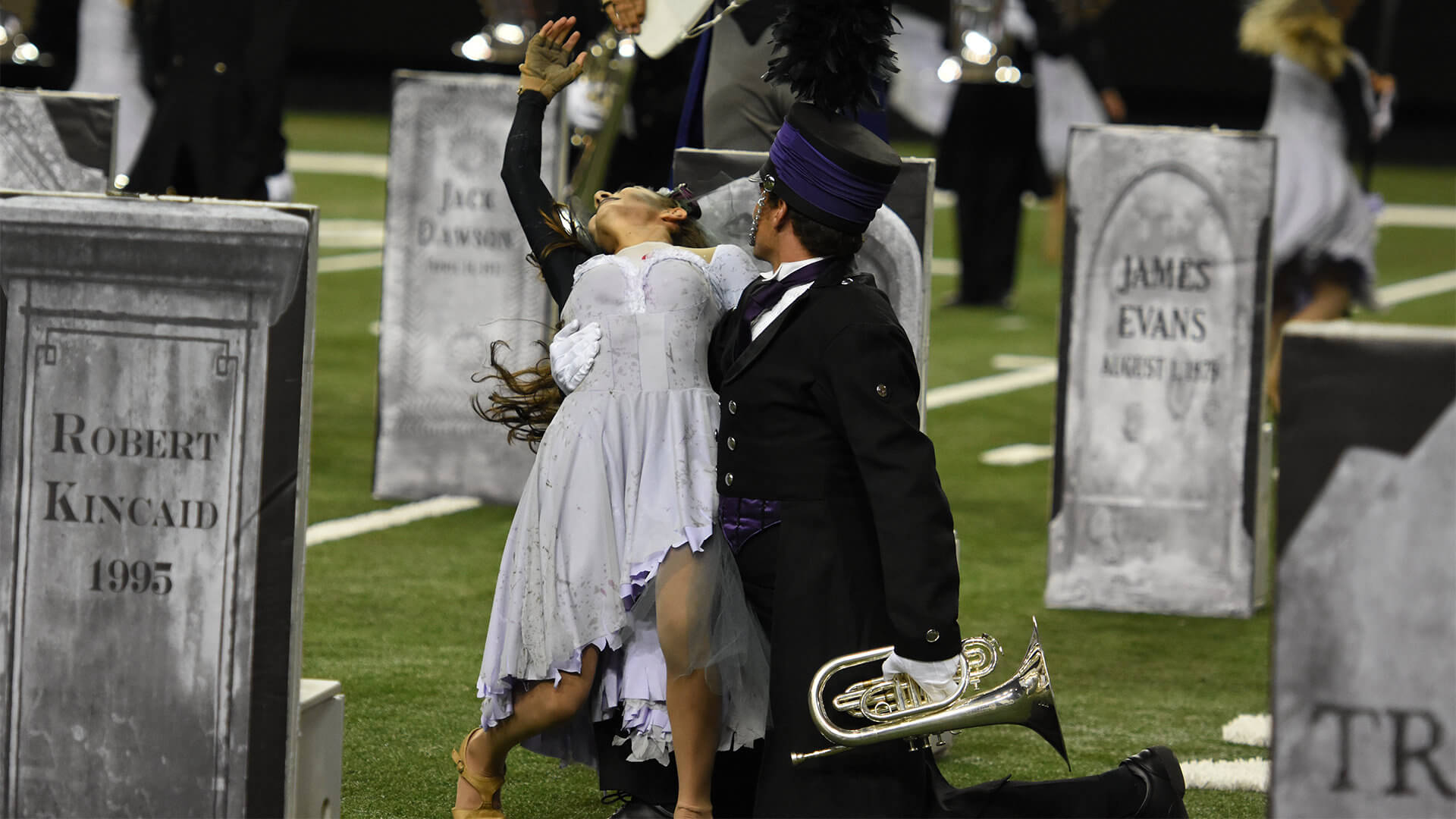 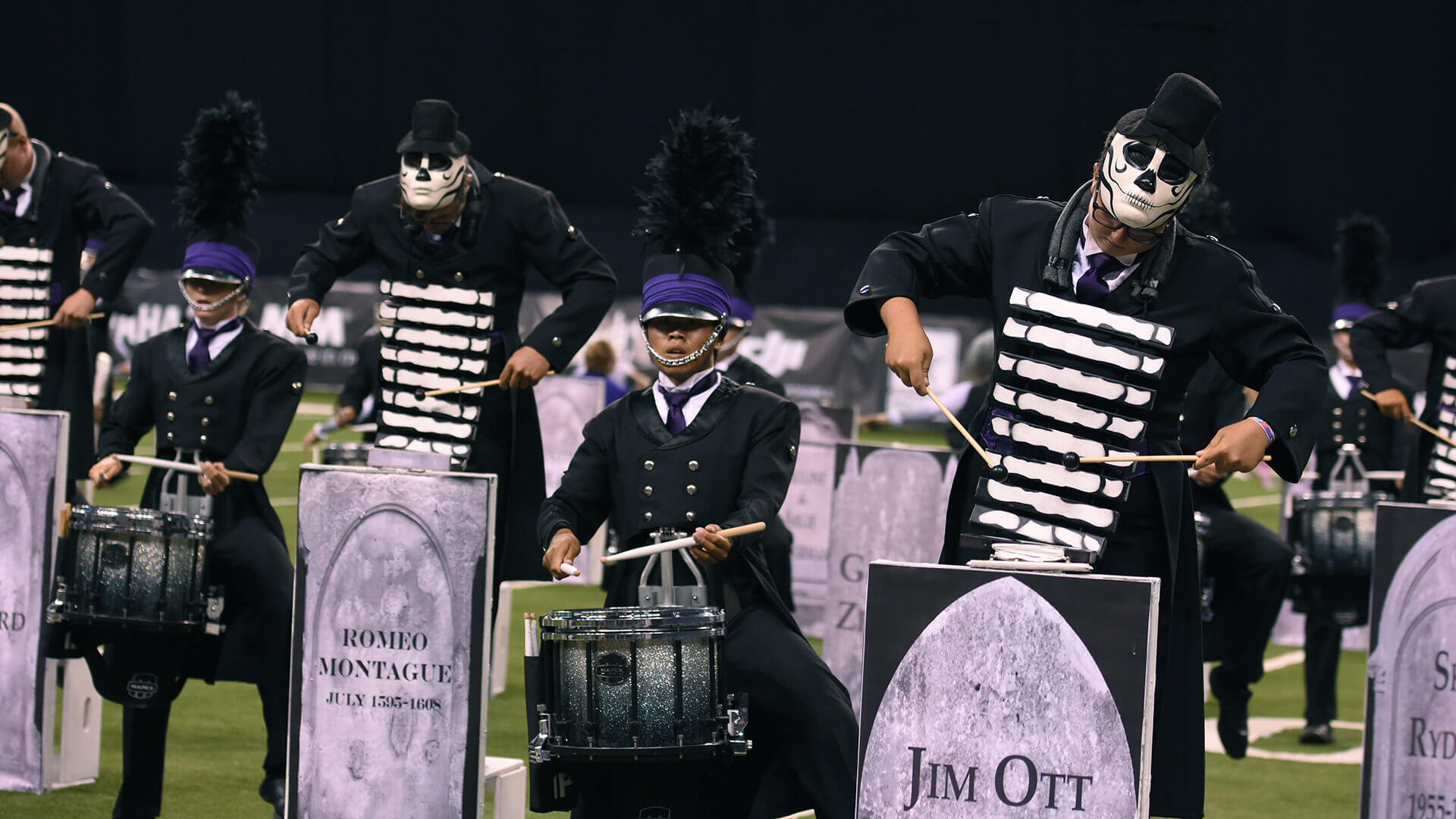