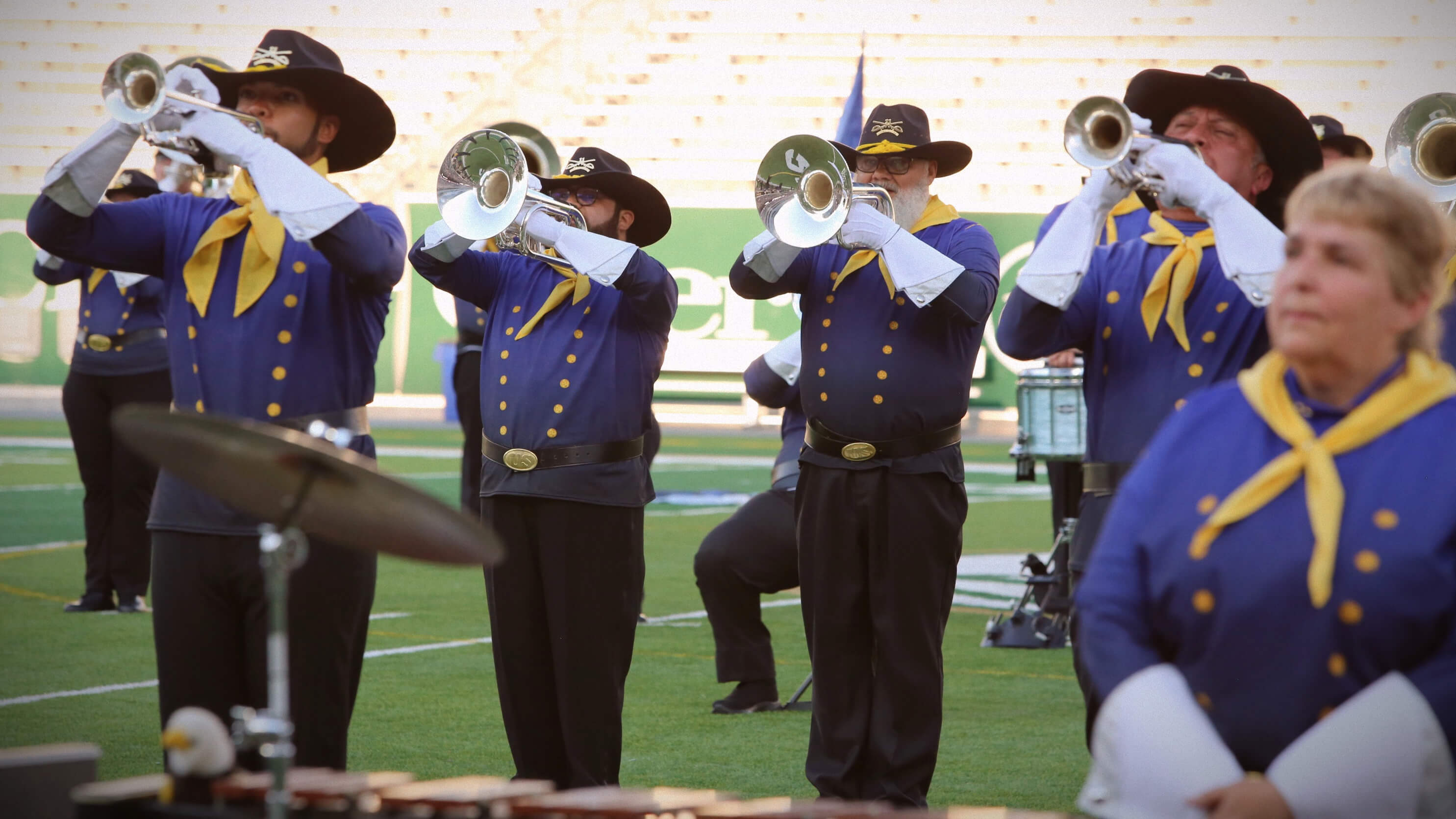 The Troopers Legacy Corps performed at the 2022 Drums Along the Rockies DCI Tour event this past July in Colorado. (troopersalumni.com)

“The Troopers Are Coming!”

That was big news in the drum corps community back in the 1960s. The Troopers were the first corps to figure out a national touring model, and when director Jim Jones brought their western-flavored act east, it was something special. Audiences were blown away.

Some of those very same people are doing it again in 2023, along with a few hundred friends and admirers. The Troopers Legacy Corps will be appearing at the 2023 DCI World Championships in Indianapolis, complete with a trip down memory lane at the conclusion of the Semifinals on Friday, August 11.

“We started out wanting an alumni corps like so many other organizations have done back in 2018 with our 60th anniversary,” said Troopers Legacy Corps director Pat Chagnon. “We sat down as an alumni group and said, what do we want to do?”

Chagnon volunteered to lead the effort: an alumni corps built up over five years with a 2023 goal to perform at the DCI World Championship.

They were off and running with a core group of 34 members in 2019 with plans to expand in 2020 before the COVID pandemic brought everything to a screeching halt.

2021 came around and the group wanted to do something to get it back on track. Having grown up in New England, Chagnon remembered the big parade and concert in Plymouth, Massachusetts on Thanksgiving weekend. The leadership group liked it and the deal was done: The Troopers Alumni Corps was in.

It seemed like a good idea at the time, says Chagnon. “As soon as we announced it, people started reevaluating their travel … the whole COVID situation, and we went from a roster of about 90 members who were all Troopers alumni to a roster of about 30.”

But they were already committed. What to do now?

With a goal of involving as many people as possible, the Trooper Alumni Corps soon became the Trooper Legacy Corps. It’s open to everyone no matter your previous corps affiliation.

“The response has been absolutely phenomenal,” Chagnon said. “The corps performed at Drums Along the Rockies last summer and was about a 50-50 split with alumni and non-alumni members. This year the roster stands at 190 and still about a 50-50 split.

Chagnon says she continues to hear stories from people saying “I’ve always wanted to do this” and “This is a dream come true.”

“We’re just giving people an opportunity and they’re jumping on it,” says Chagnon. “It’s a lot of fun.”

That roster is still growing as the Troopers Legacy Corps prepares for the big show in Indy come August. In addition to Friday night’s appearance, the corps also has plans to perform at a downtown Indy event on Monument Circle and the SoundSport International Music & Food Festival on Saturday, August 12.

From Troopers classics like “Ghost Riders” to “How the West Was Won,” the sounds and the sights will be goosebump-inducing, says Chagnon.

And maybe the classic suicide rifle toss? Why not! The Troopers are coming and it’s going to be special.