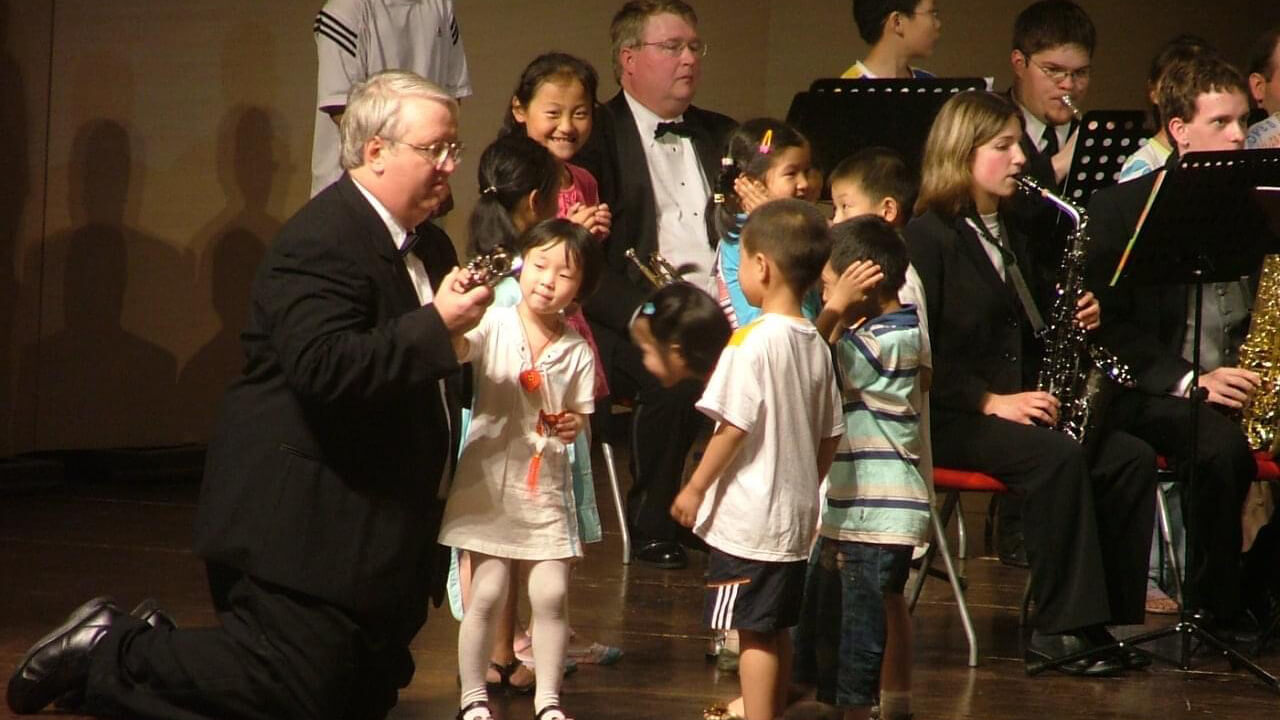 Michael Boo interacts with a group of children during an interactive concert band performance. (K. Doebler)

The late 2021 Drum Corps International Hall of Fame inductee Michael Boo will be honored this weekend with a memorial concert exclusively featuring his musical compositions and arrangements.

The programmed repertoire will include the premiere of Boo’s magnum opus, “Symphony No. 1: The Love of Friends,” completed just before his untimely passing in November 2020.

The 90-minute concert, sponsored by the Valparaiso University Department of Music, Windiana Concert Band, and the Confucius Institute at Valparaiso University, will be hosted Sunday, October 17, beginning at 4 p.m. CT at the Chapel of the Resurrection on the campus of Valparaiso. Admission is free and open to the public.

According to Jeffrey Scott Doebler, professor of music and director of music education and bands at Valparaiso, Boo served as a longtime “composer-in-residence” for the Windiana Concert Band and the Confucius Institute at Valparaiso University. Boo contributed frequently to the professional musical group both as a composer and performer, traveling worldwide with the ensemble including several trips to China during which his compositions were premiered to international audiences.

Doebler, who has known and worked with Boo since the late 1990s, says that Boo composed more than 50 arrangements and original compositions for Windiana’s China tours alone.

“When Mike was in the hospital I made a list for both him and for me, so I could show him, ‘Hey, check this out!’” Doebler said. “I found that I've conducted the premieres of 90 of his pieces, original compositions and arrangements.”

The first half of the concert will focus on many of Boo’s China tour-inspired compositions including two that will feature a soloist playing the erhu, which is a traditional two-stringed Chinese fiddle. The second half of the concert will include the premiere of Boo’s “Symphony No. 1.” Doebler says that near the start of the COVID-19 pandemic, more than 80 individuals, families, ensembles, and other entities came together to commission Boo to write the six-movement work.

“He had no restrictions, and so he really wrote what he wanted to write, which I'm excited about. There's a lot of stuff in this music that to me is his most advanced. I'm really proud of that and really pleased for him,” Doebler said. “So that's the good news. The bad news was that he finished the symphony right before he died. He was excited about the fact that it was done, and that we had it, and that we were going to play it.”

A number of those involved with the commissioning of the symphony will join the combined Valparaiso University Chamber Concert Band and Windiana Concert Band for three days of rehearsal this week before performing as part of the premiere on Sunday.

With such an extensive repertoire of Boo’s to choose from, Doebler had the challenge of programming a concert that not only showed the breadth of Boo’s composing talents, but that also gave the audience a feel for Boo’s often lighthearted and sometimes eccentric personality.

“I didn't want the concert to be super long, but I also want the people to understand Mike a little bit,” Doebler said. “So after the symphony, which is happy and sad and interesting and so forth, but also a bit cerebral at some points, I wanted to find a fun way to end things.”

Two encore pieces, approximately a minute long each, titled “Leaning Tower of Pisa” and “Kangaroos” will help close out the program.

In “Kangaroos,” Doebler says that each musician only plays two different notes, a low note and a high note.

“The idea is when you're playing your lower note you're seated, when you play your higher note, you're up, and eventually everybody's going to fall,” he said. “So it's pure silliness and everybody who knew Mike would say, ‘Yep, I get it.’”

Upon his passing, Boo’s estate donated his entire library of music to Valparaiso. Unique to this performance, Doebler is encouraging concertgoers to record the music and post across their social media sites. “We want the music of Michael Boo to be shared far and wide.”

Admission: Free and open to the public. No tickets are required, and all seats are general admission.

Featuring: Chamber Concert Band is the premier concert band of three at Valparaiso University. Outreach performances have included schools, churches, and community events throughout the USA, Canada, and Malta. Windiana is a professional-level concert band, based in Valparaiso. Concert tours have included Italy, Hawaii, China, New Zealand, and Australia. Conductor Jeffrey Scott Doebler serves as director of music education and bands at Valparaiso University, and is the founder of Windiana.

9. Symphony No. 1: The Love of Friends (2020)
I. Life Was Simpler Then
II. Plunge Into Darkness/Invocation and Prayer
III. Rekindling the Light Within (The Doebler Effect)
IV. A New “Normal” (Adventures in Social Distancing)
V. Heroes Among Us
VI. The Sagan Parable/Benediction
premiere performance