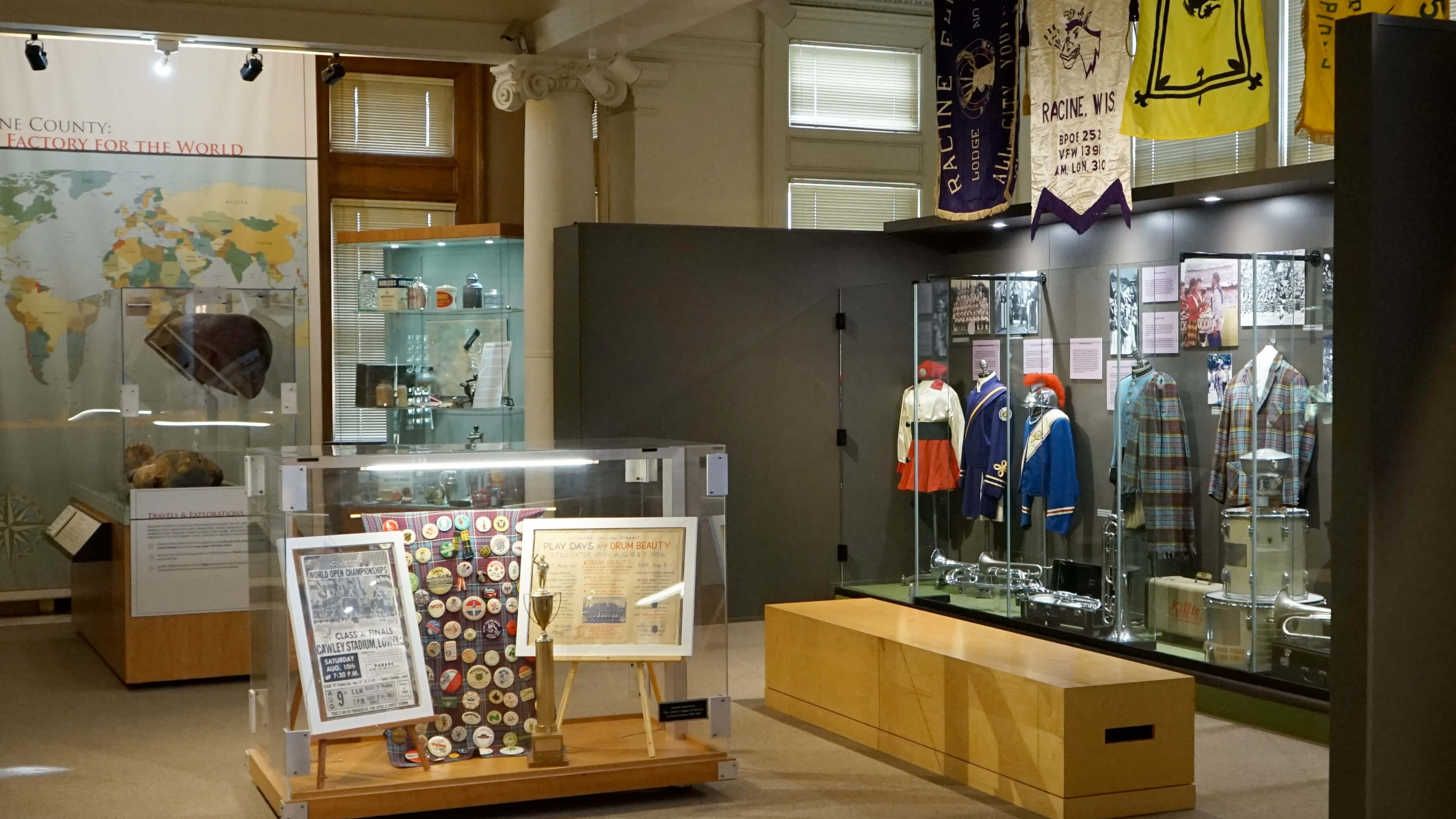 The Racine Heritage Museum recently opened a new exhibit on the long and storied history of drum corps on the shore of Lake Michigan.

Foodies know Racine, Wisconsin as the home of that delectable Danish pastry called the Kringle.

It’s very rich — just like Racine’s drum and bugle corps history. In fact, in 1967, the U.S. Congress declared Racine “The Drum Corps Capital of the World.”

Racine’s drum corps history is currently being celebrated in a compelling way with a new exhibit at the Racine Heritage Museum. The activity took off back in 1921 when Racine businessman Fred Maxstead got the American Legion Post 76 Drum and Bugle corps going.

With a focus on precision and musicality, the “Boys of ‘76” won four straight American Legion National Championships, setting the standard for corps across the country.

The Racine Scouts came along in 1927, courtesy of Racine Boy Scout Troop 15. The Scouts went on to be nicknamed the “Chrome Domes” as a result of their unmistakably distinguished silver helmets.

The YMCA-sponsored Racine Kilties were formed in 1935. The “Mad Plaid,” with widely-recognizable authentic Scottish tartans, won three VFW National Championships in the '60s.

“Racine loved its marching music,” Cesario said. “The people embraced these groups and many others throughout the region. The local Fourth of July parades were something to behold, as were the drum corps competitions themselves.”

The Kilties were also six-time DCI finalists and later became an alumni and all-age corps. As such, one can only imagine the enthusiasm that greeted the museum’s new exhibit when it opened in September.

“People showed up in what they could squeeze into of their old uniforms,” Racine Heritage Museum executive director Chris Paulson said. “A couple of guys showed up in kilts. The conversation has been going ever since. It's just really remarkable to be a part of this.”

Local authors and drum corps historians Al Karls and George Fennell were major forces in designing and assembling the exhibit. For them, it was a labor of love.

For Paulson, it’s something that will keep growing and evolving.

“As this exhibit moves along, it's a core piece,” he said. “It's going to be here for several years. We find that there's just lots and lots of other material there. We're working on an interactive aspect right now. We'll have video and sound and loads of images that we just couldn't get into the exhibit space that we have.”

You would expect nothing less in the drum and bugle corps capital of the world.

About the Museum: Racine Heritage Museum is dedicated to preserving the material culture and telling the special stories of the people of Racine County; their achievements, diversity, inventive genius, productivity, craftsmanship and entrepreneurial spirit.

Admission: Free and open to the public

Face coverings are currently required at the Racine Heritage Museum, in accordance with the City of Racine’s COVID policies.