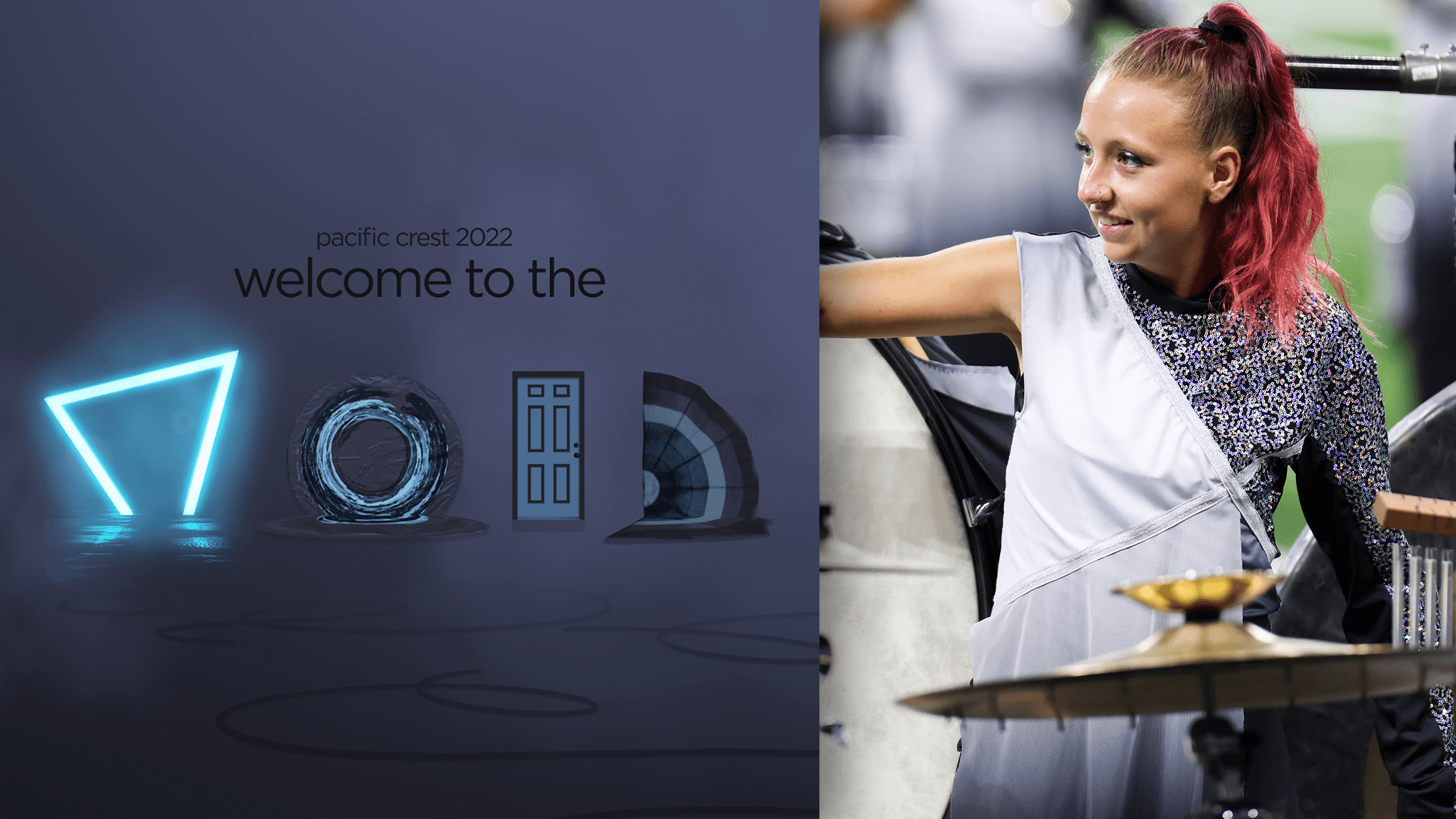 Pacific Crest will present "Welcome to the Void" as part of the 2022 DCI Summer Tour.Photo by: Drum Corps International

“Where do the props go at the end of the season?”

In theory, the answer is obvious — and make no mistake, Zuniga and his team of designers know that. Generally, all of the set pieces used in drum corps’ productions end up somewhere, whether they’re sold to other ensembles, or repurposed for future years.

But in a philosophical sense, the question stuck. When all is said and done, where do those props — those designs, those ideas — end up?

“In terms of visual storytelling — once the corps is done, they push out of the tunnel… and the props literally just disappear in their hands. But then the question is, where did it go?” Zuniga said. “We came up with this idea of a graveyard or void where they all end up appearing.”

Inspired not only by this concept of old props’ afterlife, but also by countless images of sculptures and paintings from various artists that give the appearance of melting, the impetus for Pacific Crest’s 2022 production was born.

Titled “Welcome to the Void,” the show is intended to create a world — a void, an “upside-down” of sorts — in which drum corps design history is slowing melting, fading away into memory.

AUDITION FOR THE 2022 PACIFIC CREST

As far as the execution of that concept, Zuniga and his team intend to leave that up to fans’ imagination, at least for now.

But there have certainly been hints.

Visually speaking, while Pacific Crest’s designers don’t want to give away the store as to what they may be using as props for 2022, the corps’ show release graphic does feature a quartet of past set pieces. The props in question, which spell out “V-O-I-D,” are drawn from the productions of the 2019 Pacific Crest, 2017 Santa Clara Vanguard, 2005 Cadets and 1982 SkyRiders.

Zuniga neither specifically confirmed, nor denied, that any of the props featured in Pacific Crest’s social media activity will play a role in the 2022 production, but he did confirm the use of one familiar set piece; it’s arguably the one that got the ball rolling from the beginning.

“And when I pitched it to one of our design team members, Darren Loney, he brought up this crazy idea,” Zuniga continued. “He said, what if that was the Bluecoats chair?”

Pacific Crest is still keeping things close to the vest regarding its musical selections. Zuniga, program coordinator Glen Crosby and their team are excited, though, about what they have in store from an audio perspective.

“We always want to imagine you listening to the music with your eyes closed, and know that you can at least still understand the story that we're trying to tell,” Zungia said.

The southern California corps created a new image and sound for itself — one that was flashy, energetic, electronically engaged and grooving — with 2019’s production, “Everglow,” and it stuck for 2021.

2022 is no exception. According to Zuniga, fans can again expect energy, groove, and somewhat of a “darker” tone from “Welcome to the Void.”

“It won't be so dark that it’s in your face,” Zuniga said. “It's definitely going to be extremely musical. There's going to be a lot of variety. And in the end, it's going to feel like Pacific Crest, like what we started in 2019.”

“We want to do music that seems like you wouldn't hear it on the field,” he added. “But you definitely would hear it in your car.”

Ironically, the 50th anniversary of Drum Corps International didn’t particularly play into Pacific Crest’s design choices for 2022. It’s an added bonus, though; the show wasn’t originally intended to pay homage, but by its very nature, homage will be paid.

“It wasn't like we were looking to do any kind of tribute to the last 50 years,” Crosby said. “But once we started talking about it, it's like, ‘Oh, there's kind of an ‘in’ that we have here that would pay homage, without having to specifically make it a tribute show.’”

“We're doing our little modern take on the way things are going now for the next 50 years,” he added, “while saying, ‘Here’s what happened some of the last 50 years.’”

But as far as working Pacific Crest history into the show, Zuniga noted that fans can be on the lookout for a bit of recent SoCal corps imagery.

“We have a unique way to enter the performance space at the top of the show that will pay homage to our 2019 show,” he said.

With a unique and exciting program concept in place and building on its strongest competitive season of all-time — Pacific Crest finished the 2019 season on a red-hot run, pushing its way to all-time highs in final placement (14th) and final score (85.350) — the southern California corps is chomping at the bit to see how high it can fly in 2022.

"We’re hopeful that we will continue our upward climb, after the most successful season in the corps history," Crosby said. "I believe we have the staff to make it possible. We’ll see how it plays out."