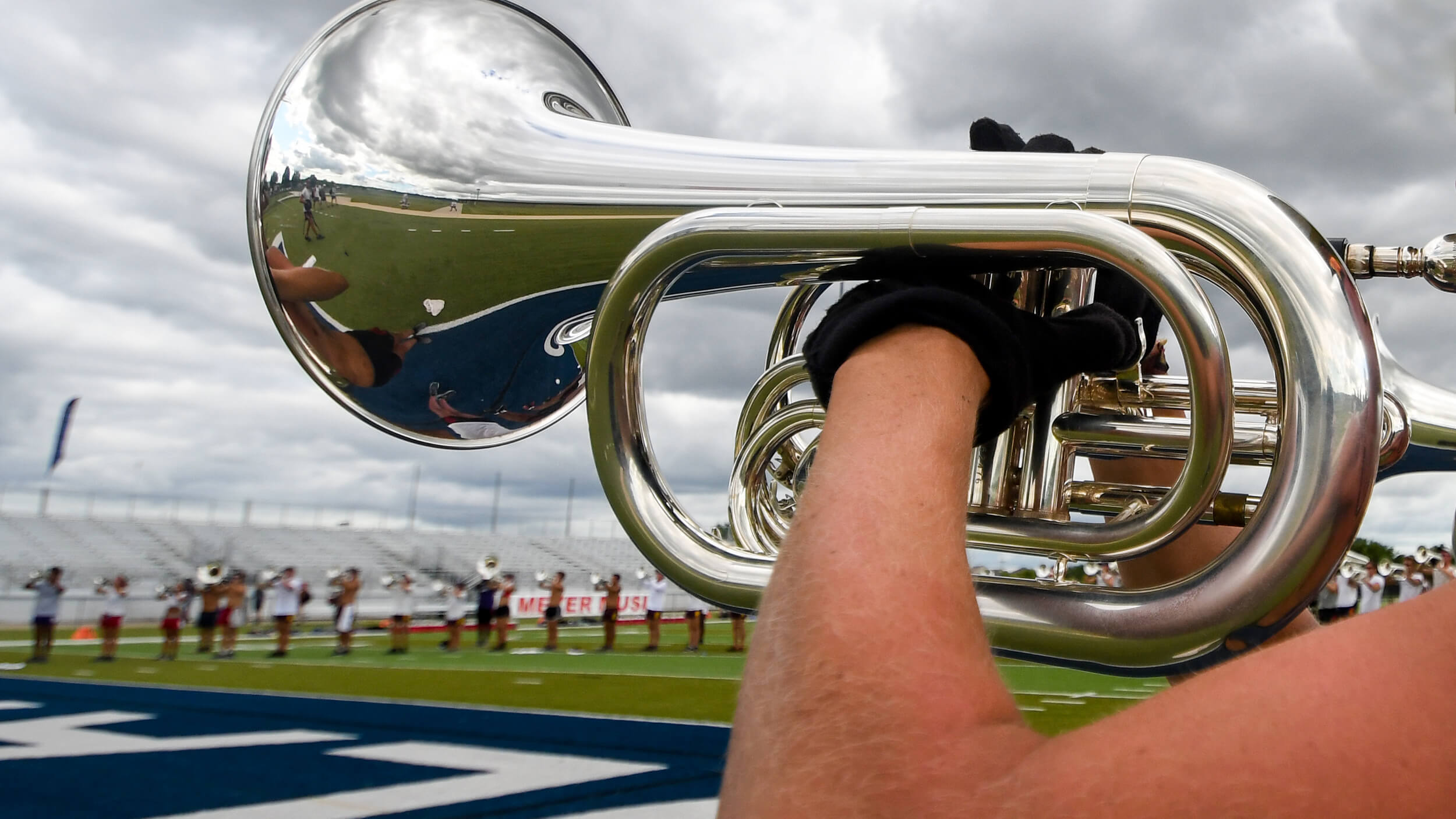 The sound of that Lucas Oil stadium crowd roar is pretty electric from field level, isn’t it?

Feeling that wave of applause rush over you, you experience an indescribable blend of energy, fulfillment and satisfaction, knowing the final notes of your 85-day tour came to the greatest finish possible, with the performance of a lifetime in front of tens of thousands of passionate drum corps fans.

There’s a bittersweetness to it, knowing the journey of a lifetime has reached its pinnacle moment, and subsequently, its completion. But you did it; you achieved your dream, and your childhood self would be so proud to see you now — seeing how much you’ve grown as a performer, as a leader, as an individual, and all the memories and friendships you made along the way.

So, how’d you get there?

Like thousands of other young performers every year since the 1970s, you likely started with some form of an audition. But even before that, you had to sign up for that audition, and even before that you had to pick a corps and find that corps’ audition information.

Whatever your inspiration, your spot on the field is waiting for you.

The simple fact of the matter, though — now more than ever, on the heels of a vastly successful, yet wholly unprecedented 2021 summer tour — is that no two corps’ audition processes are the same.

Luckily, you’re already here at square one. In fact, at this point, you’re really at square two, because square one was making the simple-yet-life-changing decision to pursue a performance opportunity with a Drum Corps International ensemble. And that’s progress!

“I believe I’d say this in any year, but just don’t count yourself out before you even try,” Blue Knights director Daniel Belcher said. “If marching drum corps is something you want, one of the biggest obstacles is just in taking that first leap.”

For the 2022 DCI season, many corps’ fall auditions will thrive on a blend of in-person and virtual audition opportunities.

Many corps’ auditions, though, often double as opportunities for education and skill development for any and all interested performers. As such, corps are generally setting a “normal” in-person audition schedule for the fall and winter seasons.

For some, that means single-day camps at regional locations. For others, that means a handful of weekend experiences throughout the country. Again, every corps is different, but the basic DNA of an audition process is generally the same, and it starts with a simple sign-up.

Largely across the board, though, with organizations having spent the past two years managing corps operations, offseason rehearsals and more in a primarily-virtual sphere, the opportunity to audition in that same sphere will be more readily available than ever.

“For most participants, the audition process will be entirely in-person,” Belcher said. “However, any potential auditionees can request a virtual audition from our staff, which is new this year. This year, we are planning to eliminate one of our winter camps to instead use virtual learning and preparation strategies we developed last year.”

“At this point, our plan is to conduct the primary auditions in-person, allowing for virtual auditions in situations where an in-person interview is not possible,” added Jersey Surf executive director Bob Jacobs.

And luckily — a positive byproduct of the pandemic-related challenges of the past 18 months — the 2022 virtual offerings in drum corps should be more streamlined than ever, with corps having plenty of experience in online education.

“Since the start of the pandemic, our members and our staff have become much more comfortable and efficient at teaching and learning through synchronous and asynchronous online learning formats,” River City Rhythm executive director Bojan Hoover said.

So, you’ve covered step one by expressing interest in marching. You’ve covered step two as well by seeking out more information. Before taking steps three, four and so forth, though, you undoubtedly have some questions.

How do I know if I’m eligible to march?

There’s a small handful of simple criteria that must be met to qualify for drum corps eligibility, with the main category being age.

Am I too old to march in a DCI corps?

As written in the Drum Corps International rule book:

Drum and bugle corps composed of members not over 21 years of age shall be permitted to compete. Exception: Any member who turns 22 years of age on or after June 1 is eligible to march during that year.

In terms of instrumentation, you can audition for a drum corps no matter what instrument you play, but drum corps are specifically made up of brass, percussion (marching drum line and stationary front ensemble), as well as color guard performers and drum major/conductors.

As such, if you don’t play one of the aforementioned instruments, you’re not necessarily out of luck. Many successful corps members will learn a new instrument as part of their entry into the drum corps activity and many corps’ instructional staffs will be more than willing to teach them.

READ: These woodwind players do drum corps, and so can you

What costs can I expect from my audition experience?

Like nearly all extracurricular activities, the drum corps experience carries with it a variety of costs, starting with the audition.

Tuition and fees varies from corps to corps, but generally speaking, registration for a virtual audition, in-person experience day or weekend audition camp can range anywhere from about $50 to $150, depending on how extensive a given corps’ experience is and what’s included in the cost.

Some corps will often offer discounts for pre-registering for an audition by a certain date, and others may offer scholarship and financial assistance opportunities to those in need.

Always thoroughly research a corps’ posted audition information and don’t be afraid to reach out to a corps directly to better understand all related costs.

Corps membership limits increased to 165 ahead of the 2022 season. How will this affect my audition experience, if at all?

This fall, Drum Corps International’s voting member corps proposed and ratified an increase in membership limits from 154 to 165 this fall, with the same rule also adopted by Open Class corps as well.

World and Open Class corps directors alike shared that this change shouldn’t have a major impact on audition processes for 2022:

“We’re still in the process of deciding how we will allocate those new places on the field, but we’re most excited about the fact that up to 11 more young adults are going to get the Blue Knights drum corps experience. Those seats have existed on the busses, and we’re happy they’ll now be filled by performers we otherwise would have had to turn away.” – Daniel Belcher, Blue Knights

“We are looking forward to the prospect of enabling an even greater number of musicians and color guard performers to take part in the incredible experience provided through the experience we offer, as proud World Class members of Drum Corps International.” – Bob Jacobs, Jersey Surf

What else do I need to know?

Corps directors of all levels are largely united in their message to prospective members — just go for it!

There are risks and sacrifices involved in the drum corps journey that can be cause for pause, but the life-enriching benefits of the summertime marching music activity and community are second to none and well worth the challenge.

“Prospective corps members should commit to the process early, and take advantage of the many resources corps are offering to help them prepare their material,” Madison Scouts director David Lofy said. “Drum corps want nothing more than to see auditionees dig into the tools provided to help them perform at their best.”

And ultimately, if you enter the audition process ready to learn, ready to grow and ready to put in the work to achieve your goals and dreams, the sky is the limit as Drum Corps International gets ready to celebrate its milestone 50th anniversary in 2022.

“With two seasons off from Drum Corps and band, everyone should know that the most important thing to do is to come to auditions with an open mind and a good work ethic,” Spartans president Paul LaFlamme said. “We are looking for members who are excited to get back to work and are ready to help bring the marching arts back stronger than ever.”