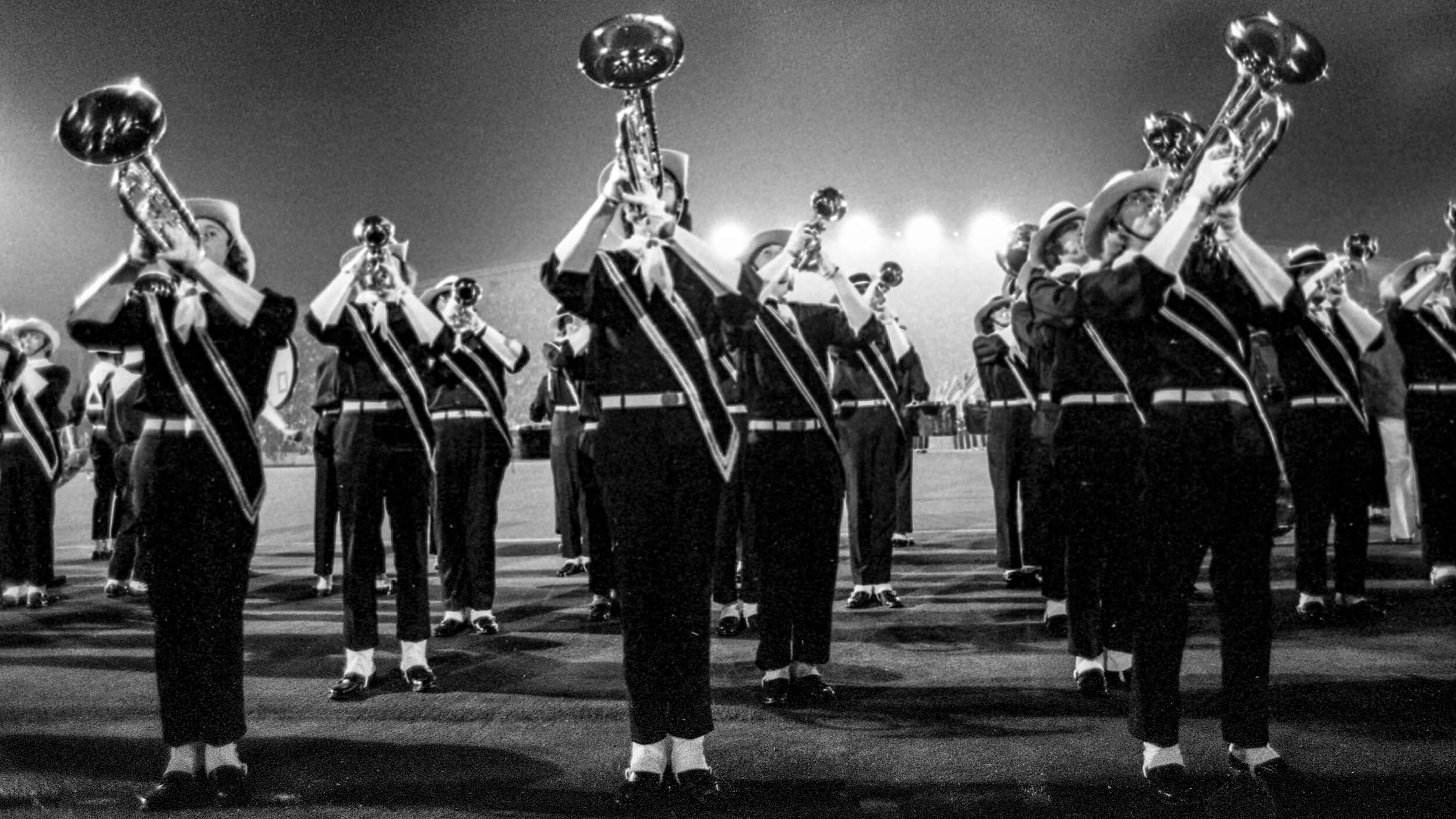 Drum Corps International was just in its third season in 1974, when Madison Scouts made a big lunge for the World Championship title at Cornell University's Schoellkopf Stadium in Ithaca, New York.

That year, four corps made the Finals for the first time: DeLaSalle Oaklands (which would become Oakland Crusaders the following year), Purple Lancers (in their last season), Blue Devils and Phantom Regiment (each being finalists ever since).

1974 was a tough one for corps that had been World Championship finalists in DCI's first two seasons: Blue Stars, after placing second and third at the first two DCI World Championships, slipped to 12th. But four other corps fared even worse: Black Knights fell from 10th in 1973 to 15th. 27th Lancers had an off year and slipped from seventh in 1973 to 20th (rebounding the next year to fourth). Bridgemen (still known as St. Andrew's Bridgemen), fell to 26th after placing 11th and ninth in DCI's first two seasons. Argonne Rebels, fifth and 11th the previous two seasons, slipped to 33rd and never did recover.

Although fourth in 1973, Madison Scouts placed 14th at the first DCI World Championship in Whitewater, Wisconsin in 1972. The combination of future DCI Hall of Famers Ray Baumgardt writing the brass arrangements and brass staff member Jimmy Elvord instilling a power into the horn line's performance made the line the envy of the activity.

Projected by many to win it all in 1974, the Scouts won the DCI World Championship Prelims by nine tenths of a point over the Kingsmen and 1.15 points over Santa Clara Vanguard, but lost to SCV in the Finals by 0.65.

We are quite fortunate to have any visual recordings from DCI's third season. At the time, it was still considered somewhat of a stretch that anyone would have an interest in watching old drum corps shows in the future. The first two DCI World Championships in Whitewater were not professionally recorded. In 1974, a local upstate New York PBS station recorded the DCI World Championship Prelims on videotape for its own news segment to promote the Finals; then used all but one of the cartridges to record over for its news broadcast. An employee of the station had the idea that someone might be interested in seeing some of the performances someday, and "borrowed" the remaining cartridge, preserving the World Championship performances of the Scouts, Santa Clara Vanguard and Anaheim Kingsmen.

The Scouts brought Victor Shoen's "Ballet in Brass" back from their 1973 production. The piece was first performed by the ensemble in 1962 and has re-appeared in the corps' productions in 1984, 1985 and 2001. Bandleader Schoen wrote the piece as a single movement in his "Stereophonic Suite for Two Bands," featuring his band playing simultaneously with Les Brown and his Band of Renown on "The Big Record" TV series, for which Schoen was musical director. Each band was lined up opposite the other in a "V," with each rhythm section in the middle and Schoen and Brown sharing the conductor's podium.

Interestingly, the 1974 Scouts show started with the color guard flag line opening up a giant "V" in front of the rest of the corps. The horn sound, even on tape, is searing. "Bond Street," falsely attributed throughout the years to piano jazz great Fats Waller (he wrote a "Bond Street" as part of his "London Suite," but this isn't it), started with a short drum solo before the brass took over. The whole piece was only 50 seconds long.

Scouts’ concert standstill number was "God Bless the Child," co-written in 1939 by soul singer Billie Holiday and her longtime collaborator, Arthur Herzog, Jr. Covered by a multitude of famous singers, the work was re-introduced into popular society as a jazz-rock vocal and instrumental feature by Blood, Sweat & Tears in 1969. This is the version Madison utilized.

After a bluesy opening chorale and statement of the melody, the tempo kicked up and lots of wailing horn solos—often at the same time—thrilled the fans with a high-powered, tumultuous, in-your-face jazz treatment new to the activity.

"Slaughter on Tenth Avenue" was written as part of Richard Rodgers' ballet music to the 1936 Broadway musical, "On Your Toes," choreographed by the famed George Balanchine, who had earlier become known for his collaborations with composers as diverse as Rubinstein, Prokofiev, Satie, Debussy, Ravel and Stravinsky. Although Rodgers' music was featured in the 1958 film of the same name, the plot was not based on that of the earlier ballet.

This work—frequently updated by the corps, but essentially unchanged—was brought back in 1975, 1982, 1989, and most recently in 2010. The company front push from 1974 and 1975 is still regarded as one of the loudest things ever heard on the field.

After a brief drum feature came "Brian's Song," first heard in the corps' program of the year before, and moved from within that program to be the closer ballad in 1974. Sneaking off to the upper right corner, as was the custom of the day, the corps turned around for the traditional re-entry and still blew the stands down from afar, aptly demonstrating the horn line's power, even at the end of the show.

For years after, this is the sound people came to expect from the corps, from its first DCI World Championship the following season in 1975 to the reincarnation of the sound during the corps' 2010 and 2011 seasons.