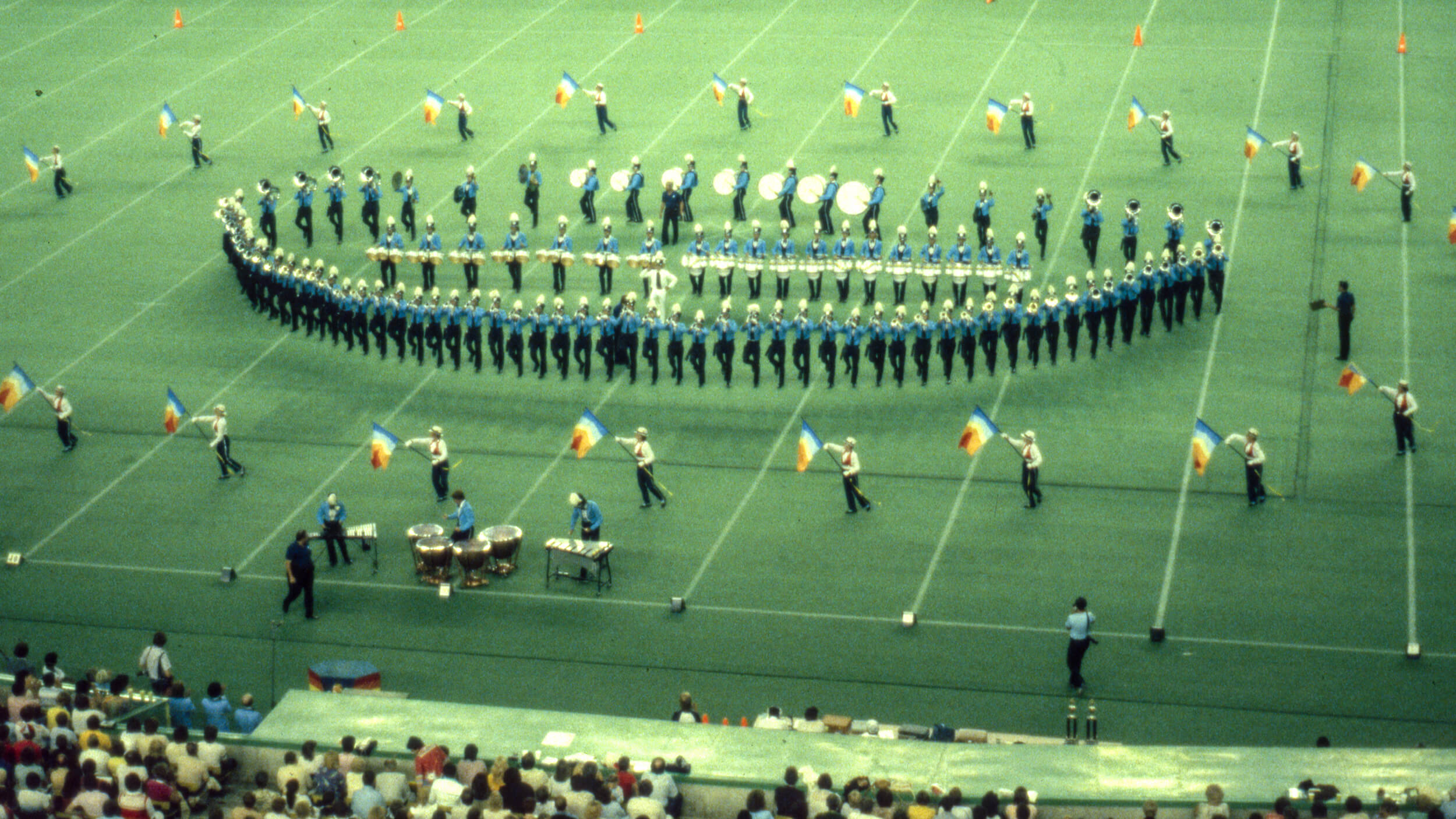 1981 marked the end of Drum Corps International's first decade and culminated with the first World Championships held out of the United States at the cavernous Montreal Olympic Stadium.

While complications with PBS broadcasting from Canada were worked out for the following year's return to Quebec, the broadcast for 1981 had to originate from the DCI Midwest Finals in Whitewater, Wisconsin, two weeks prior to the Montreal Finals.

Perhaps the biggest change in the drum corps activity in 1981 was the advent of the “grounded” front ensemble percussion section, though not every corps took advantage of it. Many corps still marched with mallet instruments around the field, but most did put their timpani in a stationary spot.

1981 marked the first of three years that Phantom Regiment brought out their popular "Spartacus" theme and The Cavaliers introduced "Softly As I Leave You." At the end, Santa Clara Vanguard would return home to California with its fifth World Championship title, finishing only 0.30 points above the Blue Devils.

Spirit of Atlanta placed 10th in Whitewater and moved up to ninth in Montreal. In 1980, Spirit placed fourth, just 0.80 points from the Blue Devils' winning score.

The opening fanfare of "Georgia On My Mind" returned from the corps' production in 1980. While the song was made famous by Ray Charles in 1960 and declared the official Georgia State Song in 1979, Hoagie Carmichael had written it all the way back in 1930.

One of the criticisms often leveled at Spirit in ’81 was a visual program that was somewhat more static than other corps. That may have resulted in a Marching and Maneuvering General Effect score on the judges' sheets that was last of all finalist corps. As an example, in the opening fanfare, which started mellow and then hit big with screaming horns, the same form was on the field for the first full minute, rotating and then backing up. This was followed in the next tune by two groups of four-horn squads each rotating around the center and passing through the other group for 64 counts.

Next on the list of repertoire, the corps turned to Jerome Kern’s "Old Man River" composed in 1927 for the hit musical "Show Boat." With lyrics by Oscar Hammerstein II, the song was sung in slow tempo to reflect the meandering nature of the great Mississippi River, quite opposite of Spirit's peppy rendition. What's quite unusual about the song is that it's written in a pentatonic scale, just like a great percentage of traditional Asian melodies. In fact, it starts on the same degree of the pentatonic scale as the folk tune that is the basis of "Variations on a Korean Folk Song," performed by The Cavaliers in 1986 and 1987.

Spirit then featured a drum solo drawn from "The Devil Went Down to Georgia" which was released in 1979 on the Charlie Daniels Band album, "Million Mile Reflections." Based on Vassar Clements' "Lonesome Fiddle Blues," it became Daniels' biggest hit and achieved greater exposure in the 1980 movie, "Urban Cowboy." (If you haven't heard the cover by Alvin and the Chipmunks from their 1993 country album, "Urban Chipmunk," try to forget that you read it exists.)

"You Are the Sunshine of My Life" came from a 1973 Billboard number one pop single by Stevie Wonder, extracted from his "Talking Book" album of the preceding year and his third song to reach the top of the charts. The bulk of Spirit's version had a peppy swing feel to it, even though it wasn't in a triple swing rhythm until the ending segment.

The closer of "Let It Be Me" was first brought to the field by the corps in 1978. The melody was originally written and recorded in 1955 by Gilbert Bécaud as "Je t'appartiens." The version Spirit utilized was the rendition performed in English by the Everly Brothers released in 1960.

1981 marked the fourth year in a row that Spirit used the tune to close out its production. Earlier in the season, the corps was using a different closer, Larry Graham's 1980 single, "One in a Million You," which is what's listed in print materials published that year. Graham had been the bass player for Sly and the Family Stone and then founded his own funk group, Graham Central Station, which recorded Spirit's original closer. When this author heard the piece at the DCI South Championship in Birmingham, it sounded as if the counts in the music and drill fit perfectly with the closer from the previous three seasons. And as many fans expected, later in the season, the original work disappeared and was replaced with "Let It Be Me."