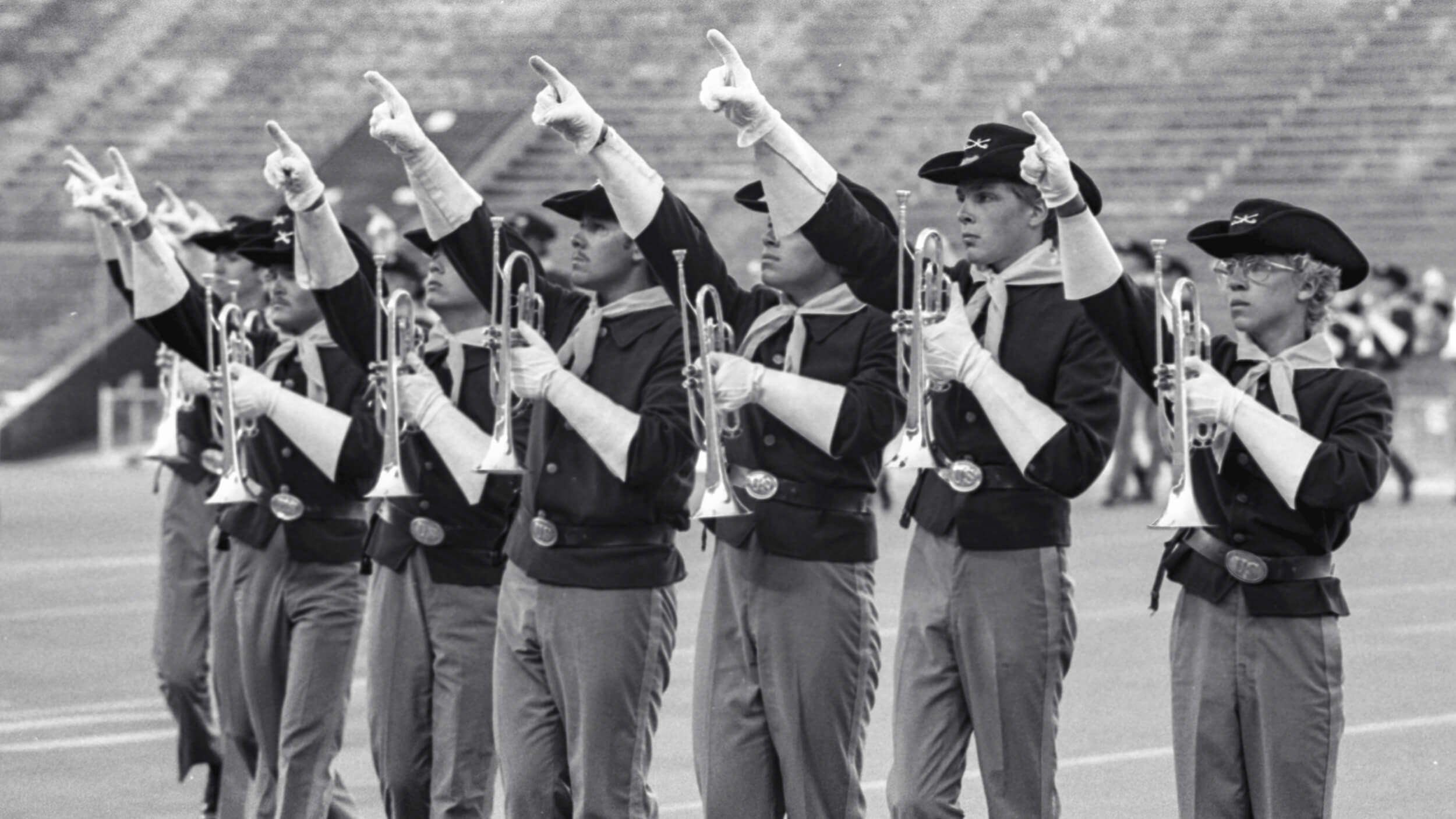 Blue Devils swept all captions at the 1986 Drum Corps International World Championship Finals in Madison, Wisconsin, making them only the second corps in DCI history to have done that—the first being the Devils’ World Championship corps from 10 years earlier. This was also the California corps' third title win with "Channel One Suite," which was also played for the first time in 1976.

Santa Clara Vanguard brought us a Russian costumed spectacular, with a surprise change of pants during the opener. The Cavaliers topped Garfield Cadets by a tenth of a point, introducing future DCI Hall of Fame member Steve Brubaker's "Dragon" drill maneuver and earning the corps its highest finish to that time. Cadets, with only 12 color guard members, utilized white plastic clarinets as props and got national exposure prior to the season by performing for the rededication of the renovated Statue of Liberty.

Kenton's "Adventures in Time" presented Suncoast Sound with its highest placement ever and Spirit of Atlanta took us into a southern revival meeting. Madison Scouts presented its take on "Alexander's Ragtime Band" and Star of Indiana loaded up on a record number of contras for "The Conversation" from "Close Encounters of the Third Kind," with the color guard wearing long white fright wigs. A bicycle-riding Wicked Witch of the West and a balloon that lifted Dorothy back to Kansas helped lead Sky Ryders to finish above 10th place.

1986 marked the last time fans we would see the Troopers among DCI’s top-12 finalists until 23 years later at DCI's first World Championship inside Lucas Oil Stadium in Indianapolis. The 11th-place corps presented a patriotic show that was very much in the style of shows we had come to expect from "America's Corps."

The show started with the drums and horns in a company front formation backing up from the front sideline. Usually, such fronts proceed toward the audience, but this allowed the opening martial fanfare from Morton Gould's "American Salute" to hit with maximum force. The horn front was timed so horns would pop up on the restatement of the theme just as the line hit the front set of hash marks. The piece is Gould's take on the Civil War melody, "When Johnny Comes Marching Home."

"Silverado," Bruce Broughton's theme from the movie western of the same name, was introduced to corps audiences just a year after the film came out. Starting out as a tender chorale, the Troopers arrangement of the piece soon moved into the brashly bombastic treatment for which it is best known.

Another chorale saw the brass section (minus the contras) and drums form a circle around six spokes of the color guard, resulting in the formation of a giant wagon wheel. This was followed by guard members high kicking during a hoedown in an extended drum break, topped off by the restatement of the horn melody.

"Prayer of Thanksgiving," a traditional hymn of Dutch origin, had been in the Troopers' productions in 1973 and 1974, when the corps placed second and sixth at the DCI World Championships. Often known as "We Gather Together," the piece served as a chance for the horns to relax their lips a bit before hitting Aaron Copland's film score to "The Red Pony."

In this segment corps members pulled off one of their trademark color guard moves, where a number of rifles were tossed across a circle to the other side, just passing on both sides of someone in the center of the circle. But that move was nothing in Troopers' lore compared to the sunburst, which is a lot more difficult marching maneuver than it may look. The reason for that is as it expands outward, so do the intervals between each of the horn players. In this case, the sunburst spread out from just over 15 yards across to 50 yards. It would be the last time we would see that famed move in the DCI Finals until 2009.

The show ended with "Battle Hymn of the Republic," possibly the most played piece ever on the drum corps field. Troopers themselves have played it nine times in their productions and countless other times as an encore. The tune first existed as a camp song in the mid 1850s, and although William Steffe is typically credited as composing it—a few years before Julia Ward Howe wrote the lyrics we now know—he may have simply been the first to transcribe it from the folk tradition.

A lovely chorale version of the melody featured the color guard members spinning red, white and blue flags, bordering a series of long red, white and blue banners as backdrop to an American flag. Rather than moving into a march-like treatment like we typically witness, the chorale just kept getting louder and louder to the end, remaining the last Finals memory we would have of the Troopers for more than two decades.