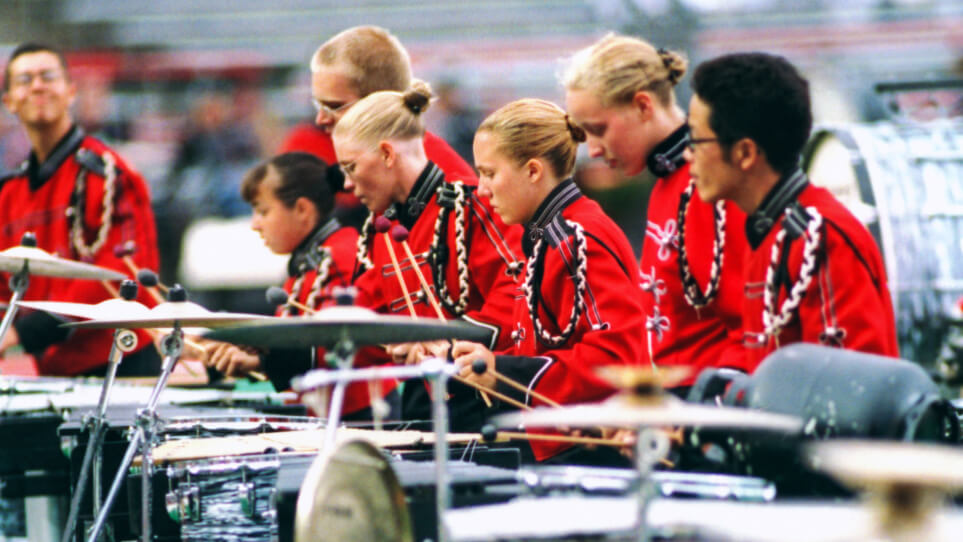 After three consecutive years in Orlando, in 1999, the Drum Corps International World Championships moved to Madison, Wisconsin for the fifth time in 15 years.

The confines were familiar and so was the result at the top: a tie between Blue Devils and another corps. Although Phantom Regiment had that honor in 1996, Santa Clara Vanguard played the role this time.

Blue Devils' "Rhythms…at the edge of time" was popular with the audience, but the fans in the stands seemed to really get jazzed by Santa Clara Vanguard's decidedly modernistic "Inventions for a New Millennium," opening with a Philip Glass work that was as risky as it was effective.

The Cavaliers introduced us to the "diamond cutter" drill evolution that had multiple groupings of four horn members alternating spinning around a fixed point while playing. The Cadets took us to their home, "The Big Apple," with the color guard carrying segments of New York taxi cabs. Glassmen repeated in fifth place, the corps' highest finish ever, with a Kodaly show that contained the word "Gold" in the title, just as their 1998 show did. The hometown Madison Scouts wrapped up the top six with "Jesus Christ Superstar," remembered for the segment where the corps marched traditional close-order drill.

New to the top-12 finalists in 1999 were the Boston Crusaders. The corps had been trying to make the Finals since DCI's second season in 1973. After placing 14th three times and being edged out of the top 12 in 1994 by four tenths of a point just outside their hometown in Foxboro, Massachusetts, everything clicked in 1999 and the corps propelled itself into ninth place. The Crusaders have been a finalist ever since.

"A Collection of Symphonic Dances" began with a soft chorale selection from Alfred Reed's immensely popular concert band classic, "Armenian Dances," soon segueing to an immense musical hit that let those in the stands know that this corps had something to say and had been waiting a long time to say it.

Massive burnt orange and gold flags filled the field for a few moments before the corps moved into the body of its show, three dances by the British composer Malcolm Arnold.

"Allegro Risoluto" (from "English Dances, Set 1") was the last of four movements of Arnold's mid-20th Century orchestral suite inspired by English country folk songs. The ending of this piece offered a depth and volume in the brass that fans were unaccustomed to from the corps.

"Vivace" is the second movement from the same suite. One can hear the horns creating the bell tones that are suggested to signal the festivities in a village town. The corps got the effect of the church bells by layering notes of ascending triads (individual notes of a chord) on top of one another, conveying the richness of pealing bells, upon which the melody was overlaid.

A selection from Arnold's "Four Scottish Dances" came next, a thoroughly delightful work of the same decade (1950s) as the previous two pieces, which, like its predecessor suite, was inspired by music from the countryside. Brass players vocalizing the melody introduced "Allegretto," the third movement from the suite.

Originally, according to Arnold's own program notes, this piece attempted to give the impression of the sea and mountain scenery on a calm summer's day in the Hebrides, a group of islands off the western coast of Scotland. The color guard interpreted the sweet and somber melody with the angst of being pulled apart from loved ones, playing off the sweet melancholy of the melody.

The final selection was Clifton Williams' "Symphonic Dance No. 3 – Fiesta," one of five dances commissioned of Williams by the San Antonio Symphony Orchestra for its 25th anniversary in 1964. According to Williams, this dance represents, "the pageantry of Latin American celebration — street bands, bull fights, bright costumes, the colorful legacy of a proud people." Three years later, Williams rescored this selection for concert band, the idiom for which it was originally introduced to countless corps members and fans.

The first 50 seconds on the field was entirely from the "Prelude" of H. Owen Reed's classic, "La Fiesta Mexicana," a raucous impression of the ringing of church bells in a Mexican community, well suited as an introduction to the pageantry that Williams' wrote about. "Fiesta" was largely written in a joyous 5/4 meter. Williams wrote that the melodic lines heard in Crusaders' rendition "herald the arrival of an approaching festival," ending in the 4/4 section that provided a home for a brief quote of "Conquest," long the corps' trademark.

The end of the show was presented with a multitude of fast-paced drill evolutions that put the exclamation mark on the corps' first appearance among DCI's top-12 finalists, hinting that the Boston Crusaders planned on staying there for a long time to come.

Michael Boo was a member of the Cavaliers from 1975-1977. He wrote about the drum corps activity for more than 35 years while serving as a staff writer for various Drum Corps International projects. During his lifetime Boo wrote for numerous other publications including an honors-winning book on the history of figure skating. He also was an accomplished composer. Boo passed away in 2020.