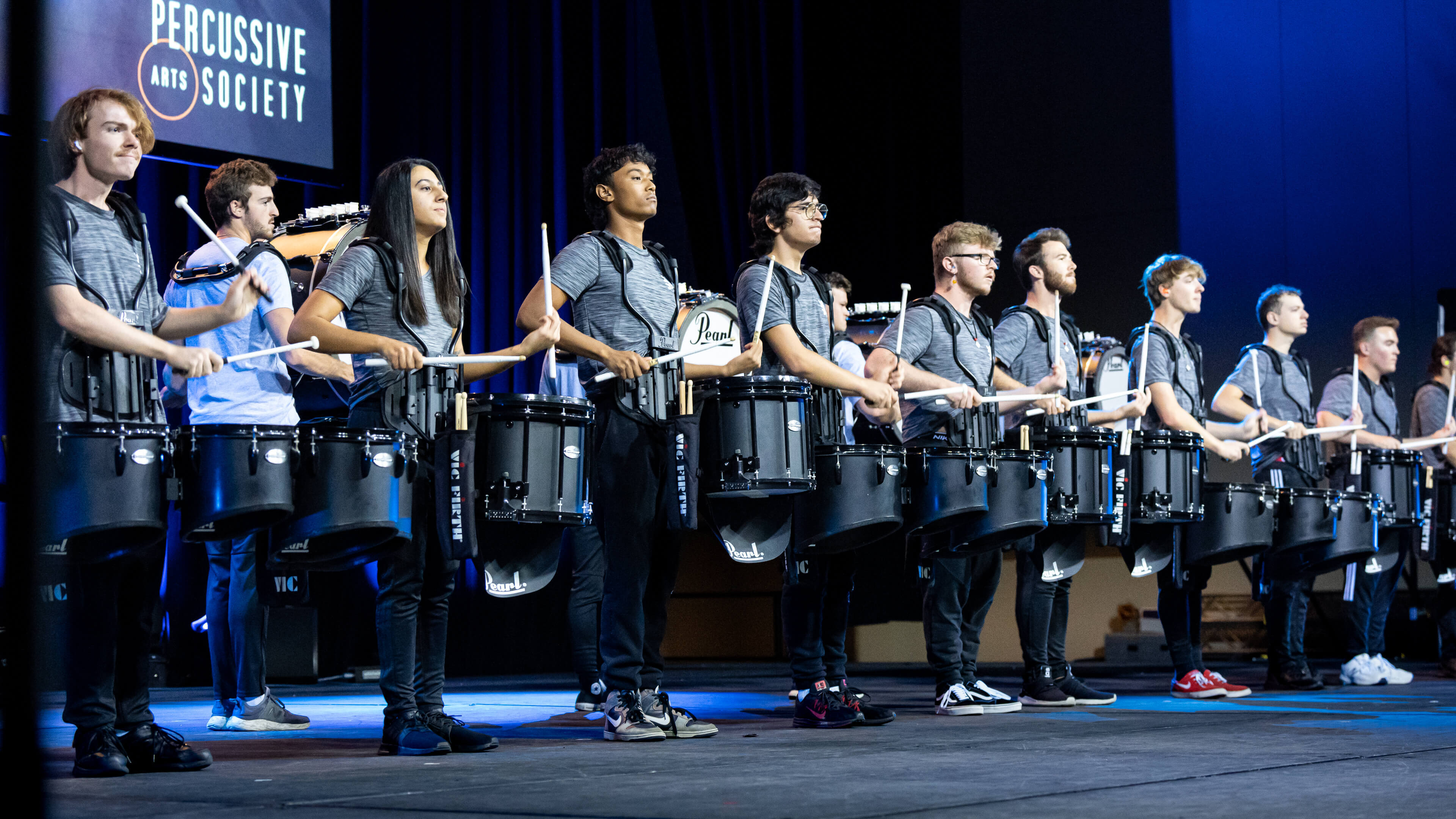 For Boston Crusaders’ 2022 battery percussion section, the second weekend of November was a bonus.

Centered around a Saturday, November 12 performance and educational clinic at the 2022 Percussive Arts Society International Convention in Indianapolis, it was a full-circle reunion that provided members and instructors the opportunity to renew their friendships, and revive the exercises and music they’d spent most of the spring and summer months perfecting.

According to Colin McNutt, the corps’ director of percussion, throughout the weekend and following the group’s presentation, he felt like a proud father.

“We’re a family,” McNutt said. “I've had to get used to a little bit of sadness, when they go away and they grow up. But we're always connected. I think a lot of the drum corps would speak that way. For me, I'm a coach and a mentor, but eventually, I'm their colleague or friend.”

Boston Crusaders’ battery was one of many headliners throughout the four-day convention that annually represents one of the largest gatherings of percussion students, professionals and enthusiasts in the world. Each year, PASIC features more than a hundred concerts, educational clinics, masterclasses and more, and the Boston corps was among that laundry list of 2022 featured presentations.

Provided the opportunity to present for such a large audience of percussionists at an esteemed event, McNutt’s first order of business was to recognize the main focus of the group’s presentation — the corps’ members.

Coming in LIVE with Colin McNutt and the BACBattery at #PASIC2022!

“The first thing I was talking about when I took the stage is that it's all about the performers,” he said. “I just write music, and it's important that I do a good job. But the students bring it to life and their personality and their heart goes into it. And that's what makes drum corps special. It's the way they interpret the shows, it's the way that they perform the shows.”

For those members, their weekend in Indianapolis was a highly-anticipated opportunity, not only to drum together, but to be together.

According to third-year snare drummer Jovanna Mullin, the weekend was, aptly put, “like revisiting a really nice memory.”

“It was really cool to have a little reunion happening,” Mullin said. “Everybody's super distant. We all come from different places, and to get back together after almost a whole season's worth of time, it was really great.”

“It was like reuniting with all of my best friends,” added bass drummer Jordan Forsythe. “It's just good to see everybody back together again.”

Members of Boston Crusaders, who had parted ways from Indianapolis at the tail end of their 2022 DCI Tour experience, converged right back on the same city for their reunion, two months removed from their final on-field performance.

Rehearsal time was quick as performers gathered in the Circle City on Friday evening, but in McNutt’s eyes, it provided a prime example of the incredible ability level of not just his own corps’ members, but drum corps performers in general.

He was particularly impressed, not only by the performers’ ability to immediately pick their music back up at a high level, but also by their ability to do so amidst full and busy lives back in their own hometowns.

“We kind of grabbed the kids out of their schools and out of their jobs or whatever they're doing now in their life,” McNutt said. “It's amazing how fast it came back.”

But the goal wasn’t just to show off Boston Crusaders’ ability levels to the PASIC audience.

McNutt wanted to show just how much drum corps performers can grow. As part of his corps’ presentation, he made a point to utilize minimally-practiced exercises that showed audience members how a drum corps ensemble learns, adjusts and adapts to new material.

“I wanted to show that you could be a student in the beginning levels, and start with simple warmups,” he said. “And we showed how we kind of built that all the way through the music, and through the most advanced things that we do.”

DCI drum lines’ participation in annual PASIC events has grown into an annual occurrence; the Blue Devils, Santa Clara Vanguard, Cavaliers and Bluecoats have all been featured in various capacities at the high-profile percussion convention in recent years.

Ultimately, McNutt’s hope is that each and every year going forward — at PASIC and other events like it — drum corps organizations can continue to have the same opportunity afforded his corps to show unique corners of the music universe what the drum corps experience is all about.

“We’re here to inspire other people and inspire others to do the next level,” McNutt said. “And hopefully, attract some people into drum corps and into DCI.”

“Doing events like this is vital,” he continued. “We need to have a drum corps here every year so that people can see that showcase of talent and passion, and then that's going to connect with younger students to come March.”