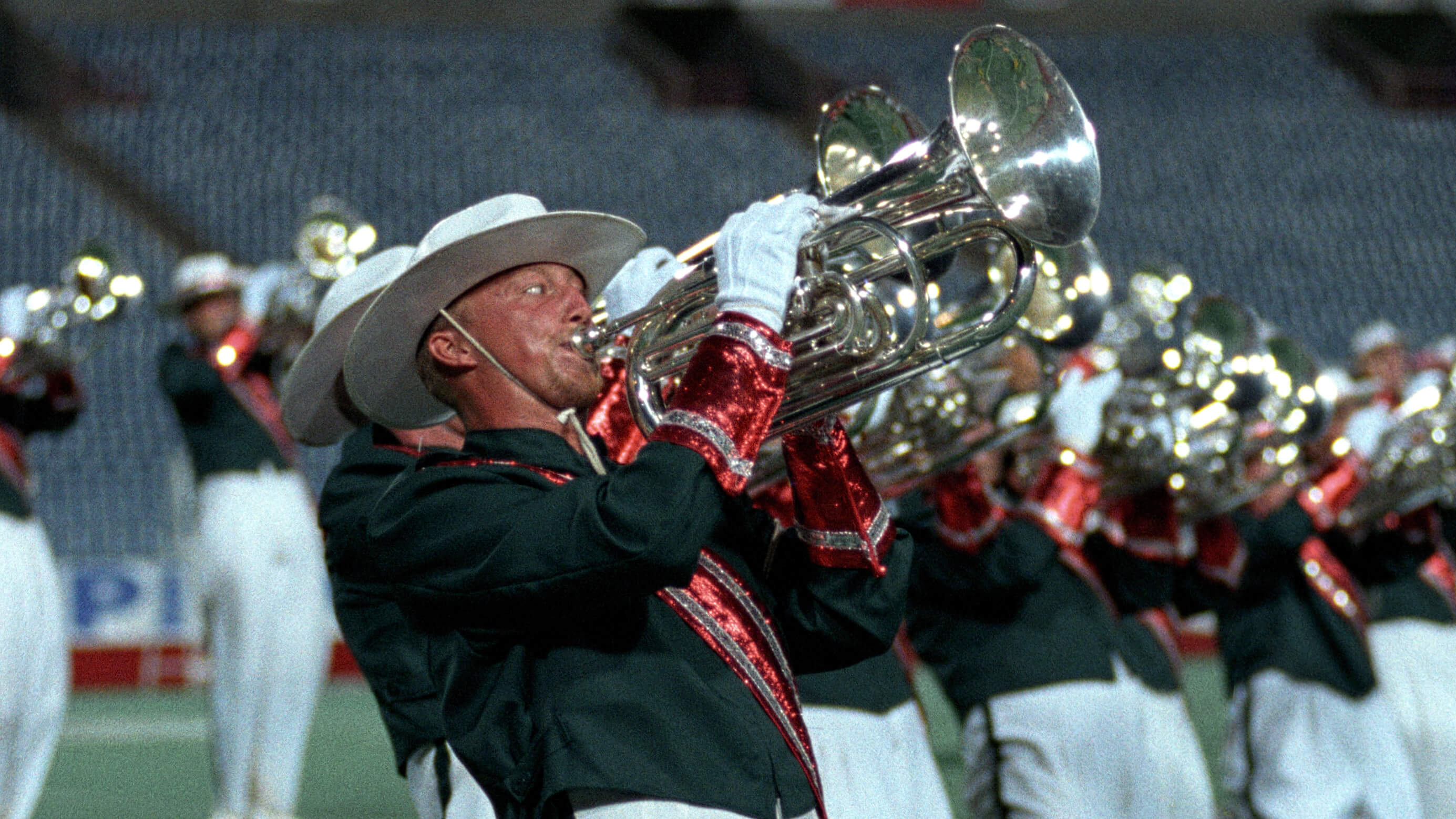 The Cavaliers ended the summer of 1995 with a bang, capturing the corps' second Drum Corps International title by winning all three shows at the DCI World Championships in Buffalo, New York. This happened despite losing to the eventual fourth-place finisher Madison Scouts seven times earlier in the season.

The Cavaliers had also lost to the third-place Blue Devils all four times the corps met prior to the final week of the season, with the Devils' "Carpe Noctem" described by DCI broadcast color analyst Steve Rondinaro as "drum corps from the dark side."

The Cadets of Bergen County finished a point and a tenth behind the Cavaliers in second place with a World War II retrospective that paid tribute to the 50th anniversary of the end of the war, as did Bluecoats' 7th place "Homefront: 1945."

The "framed group portrait" during Phantom Regiment's rendition of the haunting ballad of "Rhapsody on a Theme by Paganini" may have been the single most photographed moment of the season. Glassmen moved up in the rankings (to eighth) for the 10th year in a row and Colts' finish in ninth place was the corps' highest ever. And a corps by the name of Carolina Crown was welcomed as a first-time finalist.

Watch the 1995 Madison Scouts on DVD

The production opened with "El Toro Caliente," an original work by the corps' brass arranger, Scott Boerma. According to Boerma, the staff knew they wanted to continue exploring Latin music, which filled up the corps' entire 1994 show.

They knew they were going to bring back "Málaga" as a closing piece and had already planned to take "Concierto de Aranjuez" and expand on it beyond the introductory role it served to "Malagueña" in the corps' 1988 Championship-winning show. After the search for an appropriate sizzling piece proved fruitless, corps director Scott Stewart asked Boerma to attempt to create an opener incorporating a number of the pre-existing tunes the creative staff members liked the most.

The opener began with a solitary traditional call to the bullfight ring, with the color guard members dressed as matadors. Each selection incorporated into the piece sounded familiar, even if the audience members couldn't name the titles of every segment. One highlight was four flamenco dancers strutting their stuff atop individual plywood podiums that amplified the sound of the soles of their shoes.

After such a fiery piece, a ballad was necessary for contrast and to give the audience a chance to breathe, along with the corps members. Joaquin Rodrigo's "Adagio" movement from "Concierto de Aranjuez" served this role. The piece was written in 1939 for guitar and orchestra, though many tend to believe it's been around for centuries. The piece is inspired by the gardens at Palacio Real de Aranjuez in Madrid, a palace commissioned in the mid-1500s by Philip II of Spain, husband of Britain's Queen Mary I. Several giant props akin to ornamental bronze Spanish ironwork accompanied the movements of the color guard.

According to Boerma, the staff had an inside joke expression regarding a former instructor who said in reference to the possibility of the corps playing a disco tune, "They're gonna' be dancin' in the aisles." The title, "La Danza Pasillo" literally means, "The Aisle Dance." Nahirniak's favorite section of the piece was when the baritones played a line with the bass drums, the mellophones performed along with the tenor drums and the soprano bugles accompanied the snares.

"Moore first wrote the battery parts to that section as soloist lines, then I wrote the melodic brass lines to accompany his rhythms," Nahirniak recounted. "It was like putting a melody to great lyrics ... the drum parts being the lyrics."

Bill Holman was hired by Stan Kenton as a tenor saxophonist in 1951 and went on to write much of the Kenton band's repertoire for three decades. Though the public came to know "Málaga" through Kenton's 1971 "Live from Brigham Young University" big band album, it was written for the jazz band of Millikin University in Decatur, Illinois. The director asked Holman for a piece similar to his earlier "Malagueña," which had been written for Kenton's band.

"Málaga" was named for the city and province in the Andalusia province of southern Spain, the birthplace of Picasso that sits on the Mediterranean. Interestingly, the piece is not at all inspired by the city. Holman simply went to a map of Spain and liked the sound of the city's name.

The Madison Scouts' closing number was so intense that it verged on spinning out of control. Four high-note playing soprano players up front opened the floodgates for the rest of the brass line to cut loose.

Then, when the intensity level couldn't be turned up any higher, it all came to a screeching halt with the horns compressed into a single file down the 50-yard line. The entire line pivoted, prompted and cajoled by a color guard member waving a red cape in the collective faces of the horn players as if they themselves were the ferocious animals in a bullfight. With the rest of the guard spinning red flags, the file — now a company front — pushed to the front sideline and split into two arcs. The guard members poured in front of the arcs, wildly spinning and then thrashing the flags into submission on the ground.

The only thing louder than the blasting horns and pounding drums were the screams of the audience, which may well have interfered with satellite transmissions as far away as Spain.

Michael Boo was a member of the Cavaliers from 1975-1977. He wrote about the drum corps activity for more than 35 years while serving as a staff writer for various Drum Corps International projects. During his lifetime Boo wrote for numerous other publications including an honors-winning book on the history of figure skating. He also was an accomplished composer. Boo passed away in 2020, and was inducted posthumously into the DCI Hall of Fame in 2021.