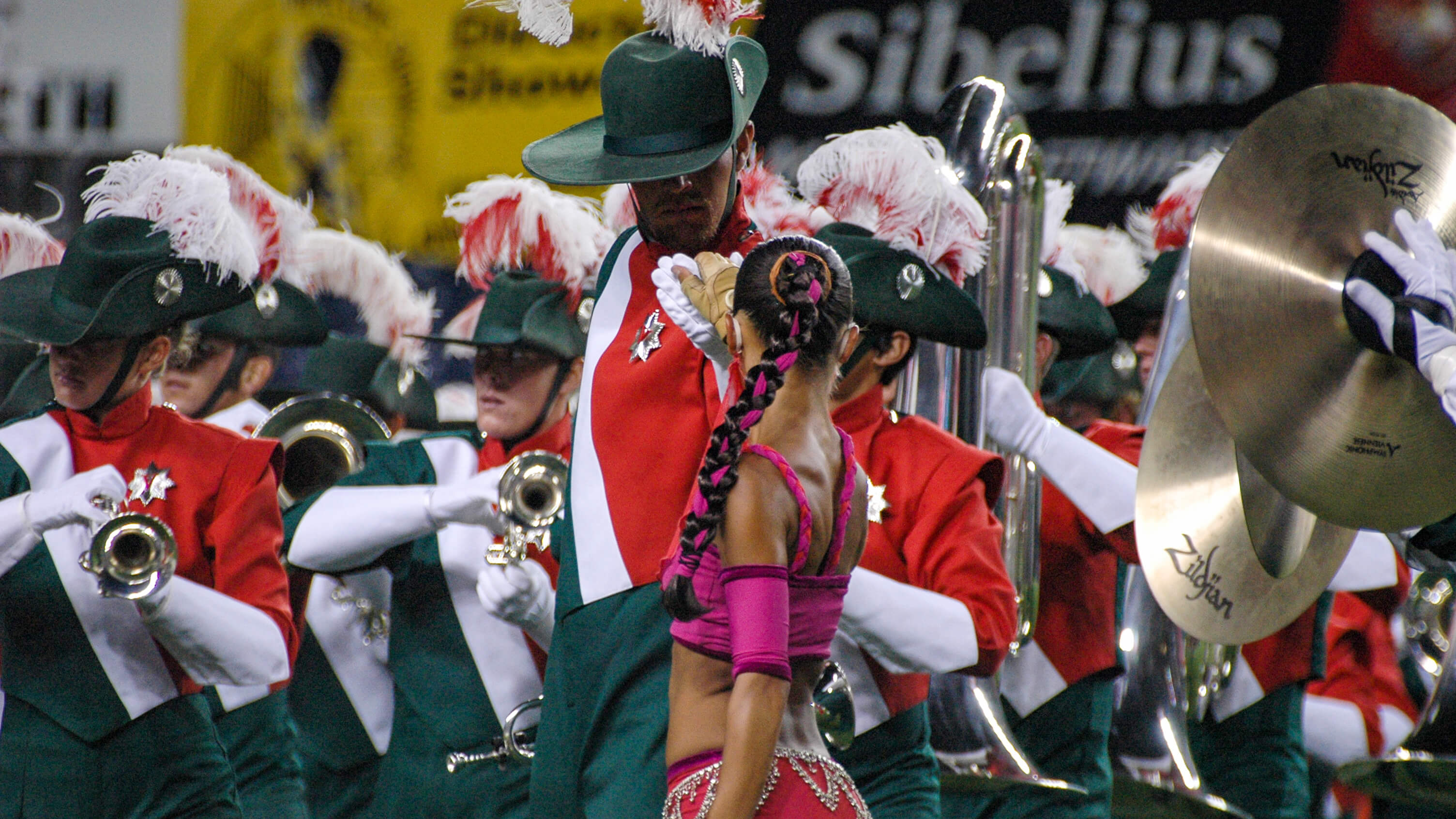 The year 2004 saw the Drum Corps International World Championships return to Denver for the first time since 1978, at a three-year-old venue next to where the old Mile High stadium had sat.

The Cavaliers' "007" show nudged Blue Devils' riding-the-rails show for the title by a scant 0.175, the three decimal places due to the addition that year of a second percussion judge. The two top corps hadn't even met until one week before the Semifinals.

After slipping out of Finals for three years, Blue Knights popped into 10th place in front of their hometown fans and Crossmen placed in Finals for the last time until 2012. Glassmen slipped past Spirit by just 0.075 to capture the last spot in Finals. 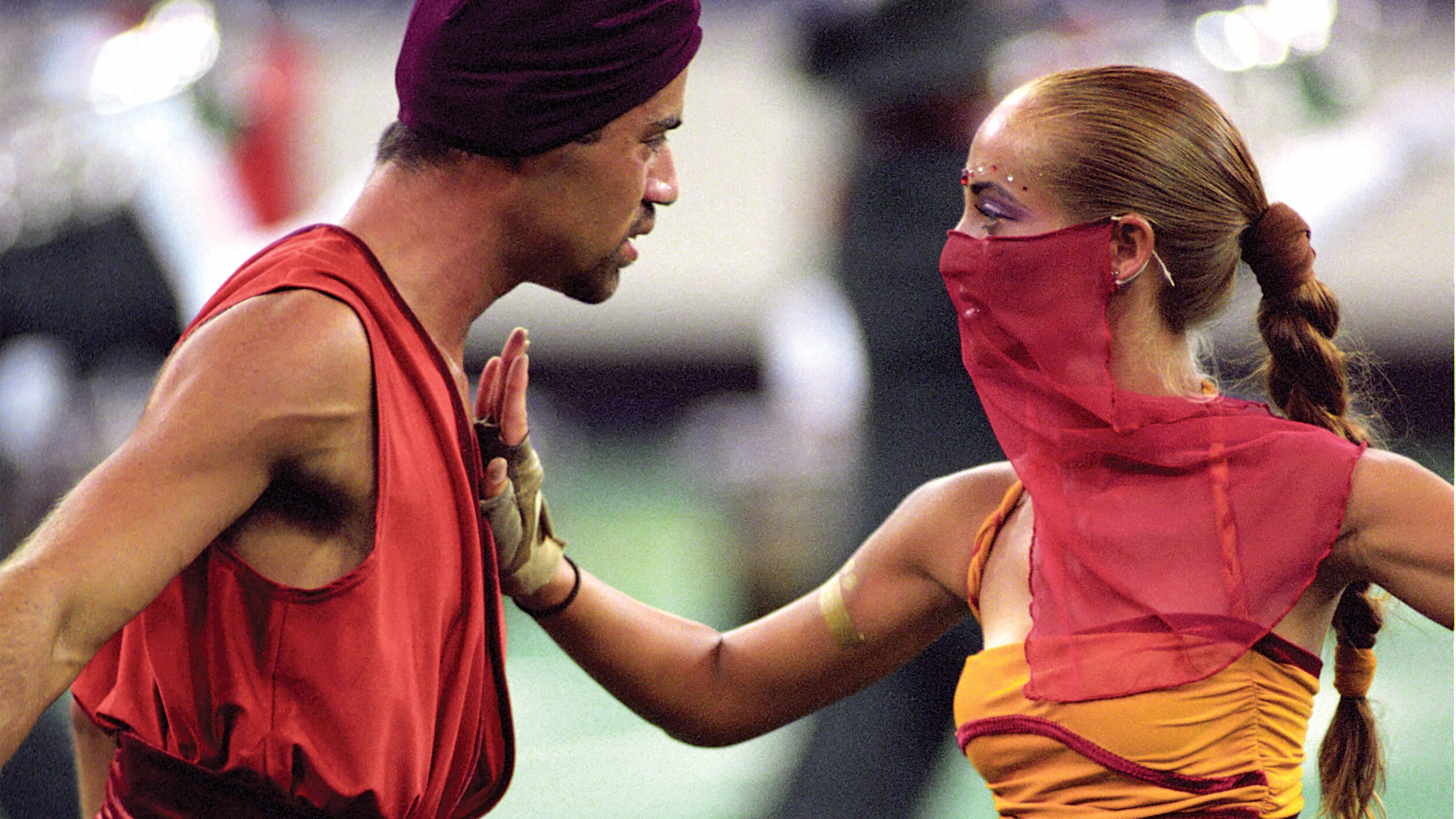 This particular story was brought to life with multiple scimitar-bearing Sultans, sabre-bearing Scheherazades and flag-bearing Dunyazades, representing the title character's sisters who tried to save her from the Sultan's death penalty.

In the original story, the Sultan was grumpy due to discovering his wife had been unfaithful to him, and so he handed her over to his vizier (sort of like an ancient prime minister) to have her put to death by the sword. After his wife's death, he married a new woman every day and had each executed at sunrise, convinced each was unfaithful. Scheherazade was the vizier's brave daughter; she begged her father to present her to his boss. On her wedding night, she started to tell the Sultan a story, but by dawn, she was not yet finished. The Sultan, now engrossed in how the story would end, spared her every day as she continued the story. 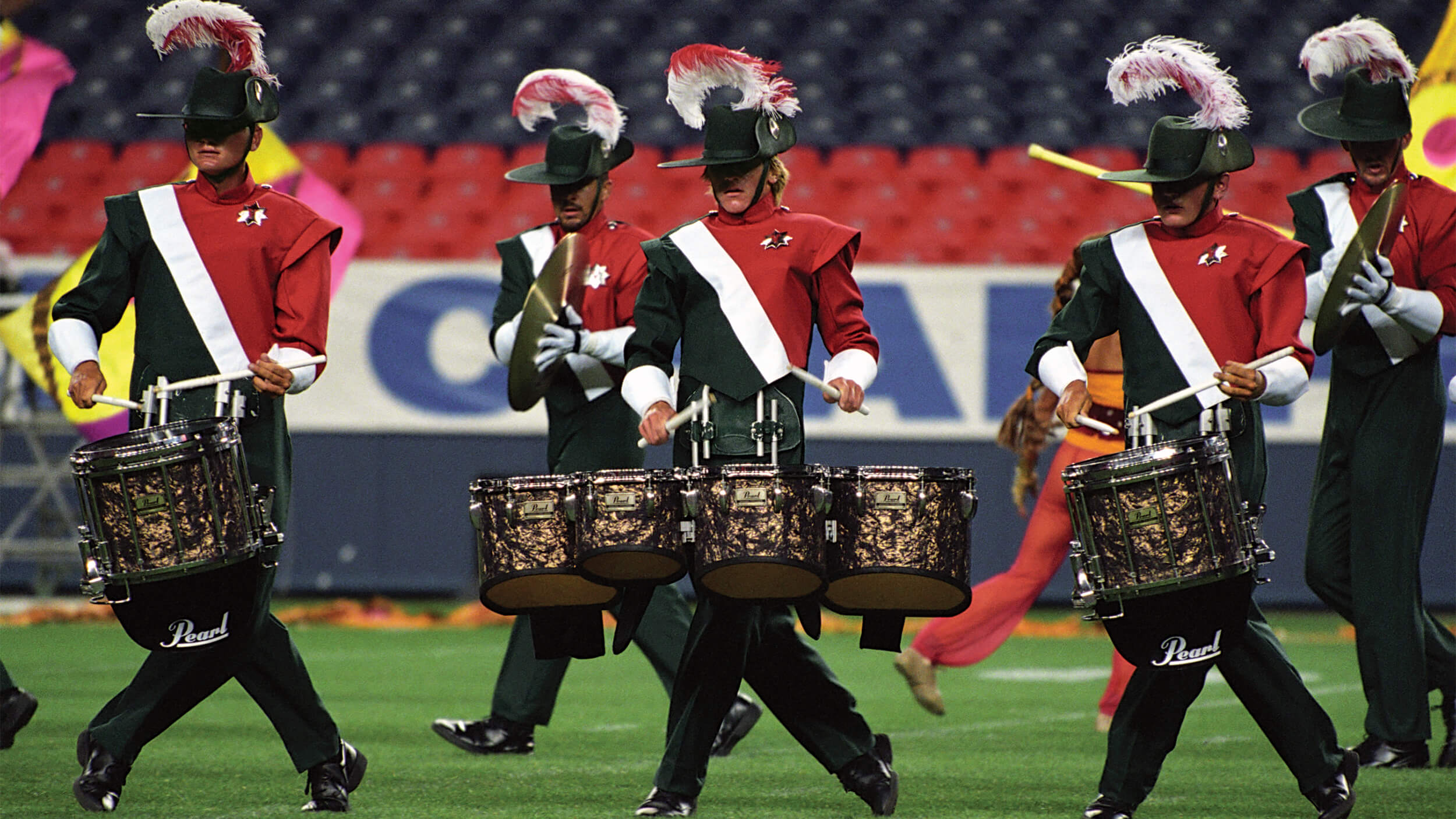 With this story, Santa Clara Vanguard created one of the greatest narrative productions in DCI's history.

The show started with the introduction of the Sultan, portrayed by the male members of the color guard section, and quickly added the Dunyazades and the Scheharazades. The women were attired similarly, but in slightly different color schemes with the Dunyazades in more of an orange and the Scheharazades in more of a pinkish outfit. Each of the groups picked up saffron-colored flags (the color often used to represent ancient Middle East royalty), but it would be a couple minutes before any of the groups would come into proximity of each other, and even longer before they would mix.

Then the men went to rifles while the women divided up between sabres and flags. At the end of the opener, the Dunyazades pulled off a martial arts kick to keep the executioners at bay.

The ballad that followed expressed much of the yearning between the title characters, culminating with the use of massive flags.

At the end of the ballad, Scheherazade approached the Sultan, but a Dunyazade stepped in to save her. As the action continued, each group within the color guard attempted to get the upper hand, with the men now utilizing scimitars—those wide swords that mean business.

With all guard members on flags during what is generally referred to as "The Sea" segment, cresting waves from both ends of the advancing company front of horns flowed toward the center, with a single Sultan and Scheherazade running toward each other in synch with the waves. Bells rang in acclamation, as the happy couple was married for better or worse, or at least until sunrise.

However, as we already know, the Sultan was fickle. During the solemn tag ending, a giant silk tunnel almost 15 yards long swallowed up all the color guard members, and the lone Sultan, ready to personally deploy the scimitar, ran toward Scheherazade as she sensuously bid him to come closer. They were the last two swallowed up by the tunnel.

At the end, only one came out bearing the intended weapon of death. Not only was it not the Sultan, but Scheharezade had been magically transformed to all-white attire, perhaps a sign that through her innocence, no more blood was going to be needlessly shed.